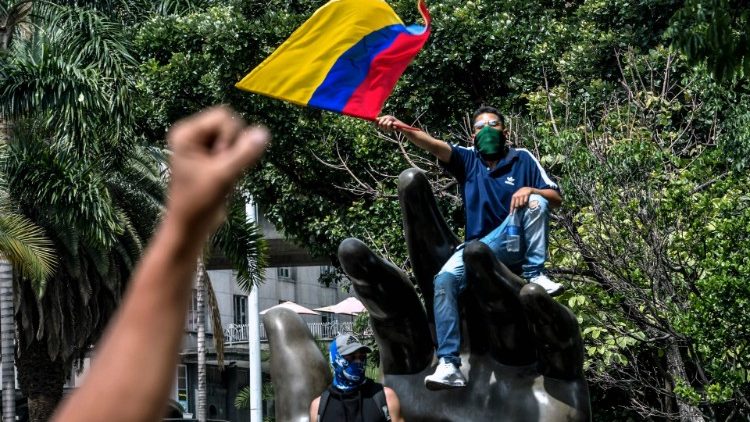 The Pan-Amazonian Ecclesial Network expresses closeness and calls for the respect and defense of citizens’ rights in Colombia following weeks of protests against a botched tax overhaul that have led to the deaths of dozens. REPAM insists that “democracy is built on the basis of dialogue and is weakened when dialogue does not work.”

In a statement, the Pan-Amazonian Ecclesial Network (REPAM) has expressed its closeness and solidarity with the citizens of Colombia, where anti-government protests have been taking place against a now-withdrawn tax reform proposal that Colombians fear will disproportionately harm the middle and working class.

The protests against the tax overhaul began in April and have now evolved to include other demands for health and educational reforms, among other things. So far, more than 60 people have died in clashes with security forces during the demonstrations, sparking international outcry and calls for an end to the violence.

In the letter signed by Cardinal Pedro Barreto and Bishop Rafael Cob Garcia, President and Vice-president of REPAM, they acknowledge that “the current situation of discontent among the population is the result of the many unsatisfied demands and unfulfilled promises.”

Need for dialogue within a democracy

“We believe that in Colombia, as in other countries in the region, democracy is in danger and its future is at stake,” REPAM said.

The Network went on to express concern about “the response of the government and the police, through the ESMAD (Mobile Anti-Disturbance Squadron), the militarization of the territories, as well as the aggression of some armed civilians and the criminalization of the protests” which have left many people “dead, disappeared or in jail.”

Stressing that “democracy is built on the basis of dialogue and is weakened when dialogue does not work,” REPAM insisted that situations of demonstrations and social protest are a “legitimate measure of defense, sanctioned as a constitutional right, which allows for dialogue, the ultimate responsibility for which lies with the State.”

In view of the situation, REPAM calls for “confidence in the path of dialogue” insisting that “citizens’ expressions be respected and defended” in spite of some acts of violence by some demonstrators which “delegitimize and discredit the just demands of those who protest peacefully.”

“We do not want the current outbursts to lead the country into an abyss of violence that cannot be stopped,” the Network urged. “We want the conditions for an honest, open, fair and permanent dialogue.”

This will be achieved, REPAM noted, through “a willingness to listen attentively and, recognizing difference, construct new paths to rebuild democracy – the foundation of the peaceful coexistence of the nation.”

Concluding the statement, REPAM reiterated its solidarity and commitment to accompanying the Colombian people’s search for “an authentic peace and social justice, hoping that all of us can be signs of hope in the construction of a true fraternity.”

Cardinal Pell: in prison I forgave my accusers, faith kept me alive