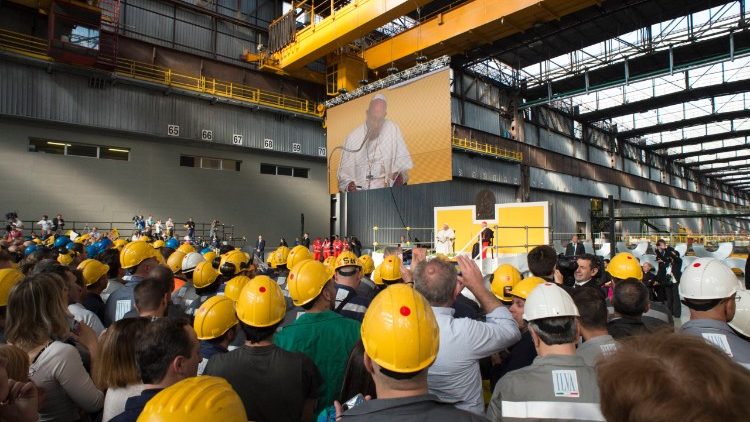 Marking 109 years since the founding of the International Labour Organisation, Pope Francis sends a video message in which he stresses the importance of the rights of the worker, each worker in each form of work, especially as we come out of this Covid-19 pandemic in hope of economic recovery.

Opening his videomessage on the occasion of the 109th meeting of the International Labour Organisation, Pope Francis noted that in recent months, the organization has done “a commendable job of dedicating particular attention to our most vulnerable brothers and sisters”.

Seeking economic solutions for all

During this persistent crisis, we should continue to exercise “special care” for the common good. The Pope noted that in the last year “we saw unprecedented loss of employment all over the world” making the crisis an economic one at a global level.

As we look for solutions to returning to a greater post-pandemic economic activity, Pope Francis asks that we avoid any form of discrimination, including “consumerism” or “nationalism”. “We must look for solutions that will help us build a new future of work based on decent and dignified working conditions” always “promoting the common good”.

On this note, the Pope continued, we are called to prioritise our response to workers on the margins of the labour market who are still affected by the Covid-19 pandemic.

Among these are migrants, notes the Pope, who are vicitms of “this philosophy of exclusion that we have become accustomed to imposing in our societies”. Migrants, in fact, along with other vulnerable workers and their families “usually remain excluded from access to national health promotion, disease prevention, treatment and care programmes, as well as financial protection plans and psychosocial services”. Pope Francis warned that this exclusion complicates dealing with the Covid-19 pandemic, increasing the risk of outbreaks which pose an additional threat to public health.

Pope Francis then went on to express a few of his key concerns. Firstly, he began, “it is the fundamental mission of the Church to appeal to everyone to work together” to serve the common good “whose goal is, above all, to build and consolidate peace and trust among all”.

He added that the most vulnerable “cannot be set aside in the dialogue that should also bring together governments, businesses and workers”.

The Church as builder of bridges

In this regard, he continued “it is essential that all denominations and religious communities engage together”. The Church has a long experience of participating in these dialogues… and offers herself to the world “as a builder of bridges to help create or facilitate them”, said the Pope. It cannot be that one who has fewer rights or more rights dialogues with one who does not. The same level of rights and obligations thus guarantees a serious dialogue.

Protection according to vulnerability

The Pope then noted that “it is also essential to the mission of the Church to ensure that all people receive the protection they need according to their vulnerability: illness, age, disability, displacement, marginalisation or dependency”. Social protection systems, which themselves are facing major risks, must be supported and expanded to ensure access to health services, food and basic human needs, said the Pope.

He went on to add that “the protection of workers and the most vulnerable must be ensured through the respect of their fundamental rights”, including the right to organise in unions. That is, explained the Pope, “organising in unions is a right”. The most vulnerable “should not be negatively affected by measures to accelerate a recovery focused solely on economic indicators” said the Pope. He added that “here we also need a reform of the economic system, a deep reform of the economy. The way the economy is run must be different, it must also change”, he said.

As we seek to reshape our future…

“This virus spreads by thinking that life is better if it is better for me, and that everything is fine if it is fine for me, and so we begin and end by selecting one person over another, rejecting the poor, sacrificing those who have been left behind, on the so-called ‘altar of progress’. It is a truly elitist dynamic, of building up new elites at the cost of discarding many people and many peoples”.

The Holy See and ILO

Looking to the future, it is fundamental that the Church, and therefore the action of the Holy See with the ILO, support measures that correct unjust or incorrect situations that condition labour relations and that completely subjugate them to the idea of “exclusion”, or that violate the fundamental rights of workers, said the Pope.

He noted that we have been reminded by the pandemic that there are “no differences or boundaries between those who suffer”.

“We are all fragile and, at the same time, all of great value. We hope that what is happening around us will shake us to our core. The time has come to eliminate inequalities, to cure the injustice that is undermining the health of the entire human family”, said the Pope.

It is the conviction of the Holy See that work, and therefore workers, can count on guarantees, support and empowerment if they are protected from the “game” of deregulation, said the Pope. Legal norms must be geared towards employment growth, decent work and the rights and duties of the human person, he added.

In order to promote this common action, it is necessary to understand work correctly, noted the Pope. The first element of this understanding involves understanding work in all its forms, “including non-standard forms of employment”. The Pope noted that work goes beyond what is traditionally known as “formal employment”. The lack of social protection for workers in the informal or hidden economy and their families makes them particularly vulnerable to clashes and they “cannot rely on the protection offered by social insurance or social assistance schemes aimed at tackling poverty”.

The Pope then turned his thoughts to women. “Women in the hidden economy feel the impact of Covid-19 in many ways, from isolation to extreme exposure to health risks”. He noted that a lack of accessible day-care centres leaves workers’ children “exposed to an increased health risk because their mothers have to take them to the workplace or leave them unattended at home”. “It must be ensured that social assistance reaches the hidden economy and pays special attention to the particular needs of women and girls”, said the Pope.

A dimension of care

The second element for a correct understanding of work is that it must include the dimension of care. “Work that does not take care, that destroys Creation, that endangers the survival of future generations, does not respect the dignity of workers and cannot be considered decent”, said the Pope. Whereas, “work that cares, that contributes to the restoration of full human dignity, will help to ensure a sustainable future for future generations”.

Addressing the participants, Pope Francis asked that political leaders and all those who work in governments “always seek inspiration in that form of love that is political charity”.

He reminded businesspeople that their true vocation is “to produce wealth in the service of all”, business abilities are a gift from God and “should always be clearly directed to the development of others and to eliminating poverty, especially through the creation of diversified work opportunities”. Sometimes, in speaking of private property we forget that it is a secondary right, which depends on this primary right, which is the universal destination of goods, said the Pope.

The Pope then called on trade unionists and leaders of workers’ associations “not to allow themselves to be ‘straitjacketed’, to focus on the real situations of the neighbourhoods and communities in which they operate, while addressing issues related to broader economic policies and ‘macro-relationships'”. Trade unions must also guard the walls of the city of work, like a guard who watches over and protects those inside the city of work, but who also watches over and protects those outside the walls, said the Pope.

Finally, Pope Francis reminded all participants that the Church supports them. “She walks beside you”, he said.