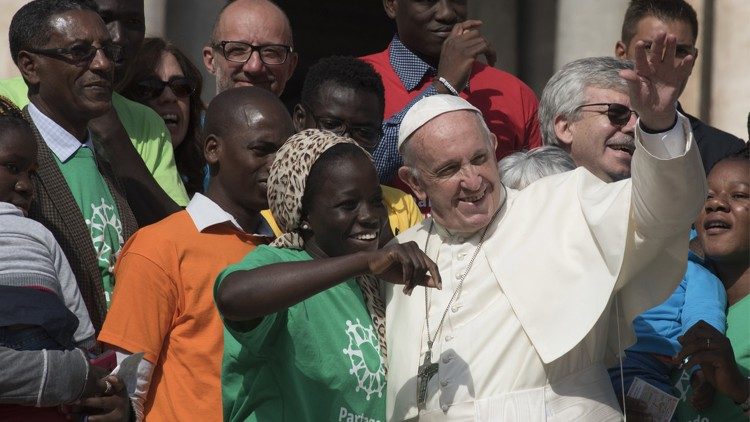 Caritas Internationalis announces the end of its “Share the journey” campaign of solidarity with migrants and refugees with a press conference on Tuesday. The organization however promises that though the campaign formally ends, the mission of journeying with migrants, refugees and internally displaced persons still continues.

In 2017, Caritas Internationalis launched the “Share the Journey” campaign with the aim of  raising awareness and listening to and working with people fleeing injustices, poverty, suffering and violence in search of a more dignified life.

The four-year campaign created “spaces and opportunities for migrants, refugees and local communities to meet, promoting a culture of encounter and mutual understanding” and supported 130 initiatives in a global campaign involving the 162 nation Caritas agencies belonging to its confederation all over the world.

Formally marking the end of the campaign, Caritas Internationalis, on Tuesday morning, held a press conference streamed from the Press Office of the Holy See on the theme: “Caritas Internationalis journeying with migrants and refugees. Looking at the future after four years of Share the Journey campaign.”

Caritas helping to build a new culture of personal encounter

In his speech, Cardinal Tagle evaluated the journey of the “Share the journey” campaign, highlighting that it has helped “to reach out to the migrants, to embrace their poverty and suffering, to lift them up with the conviction that they are not numbers, but persons with names, stories and dreams, and to see in them Jesus Christ who as an infant, became a refugee in Egypt with his parents.”

Through the campaign, he continued, Caritas has helped to develop “a new culture at a global level, a living culture of personal encounter, a new vision of welcoming the human person in the migrant” – Christians, Muslims, Hindus and followers of other religions alike.

Cardinal Tagle further highlighted that at this time of the Covid-19 health emergency when States are more concerned with protecting their citizens, Caritas’ global campaign is “a call to continue to share the journey with migrants, especially at this most difficult moment.”

Concluding, he stressed that even though the campaign formally ends, the mission still continues and he invited all people of good will to continue to live it out to the full.

Continuing in the same vein, Aloysius John said that the “Share the Journey” campaign aimed to “change hearts and plant seeds of awareness and openness towards the other.” He noted that over the course of these four years, Caritas motivated its members to “encounter migrants and promote a culture of solidarity by welcoming, protecting, promoting and integrating our most vulnerable brothers and sisters” particularly amid the Covid-19 pandemic.

Mr. John added that the end of the campaign is a moment for the 162-member confederation to “express its conviction that Caritas will continue to welcome and journey with migrants” and “build bridges of love and care to facilitate the integration of migrants and ensure their well-being and dignity” in keeping with Pope Francis’s calls to work towards the creation of an ever wider “we”.

He stressed that this is important at a time when “wall-building and discriminatory politics are being utilised to dissuade or prevent the entry of migrants,” even though the Covid-19 pandemic has brought to evidence the need for solidarity.

“Caritas Internationalis considers this the right moment to affirm its ‘commitment to make no distinction between natives and foreigners, between residents and guests, since it is a matter of a treasure we hold in common, from whose care and benefits no one should be excluded,’” he said.

Msgr. Bruno Marie Duffé, for his part, underlined four points central to the work of the campaign.

First, he stressed that “migrants are not primarily migrants but people, with a history, a memory, a land and an inalienable dignity” that must be welcomed and recognized. Secondly, he recalled four verbs used by Pope Francis in relation to our solidary with people on the move – “welcome, protect, promote, integrate” and insisted that they “define the four concentric circles of urgency” in efforts to work with migrants.

He then pointed out that the dignity of the human person – a principle of Catholic Social Teaching – gives meaning and moral translation to the human rights of all people. To this end, he reiterated Pope Francis’ calls to provide for migrants, a roof over their heads, a land or community to live in and hope for and jobs to partake in the construction of the common world for the common good.

Lastly, Msgr. Duffé made an appeal for efforts to be directed toward preventing the causes of migration, including the violence of war, poverty, inequality, corruption, trafficking, abuse and political negligence. He also called for support for programmes of integral human development, including care for the earth, the environment, water and biodiversity.

Caritas at work in South Africa

Sr. Maria de Lurdes Lodi Russini shared her experience of working in South Africa, a country with a high influx of migrants, asylum seekers, as well as thousands of undocumented and stateless people.

Inspired by Pope Francis’ message and the “Share the journey” campaign, she explained that Caritas has set to work, alongside the liaison Bishop for Migrants and Refugees in the country to preach the importance of “welcome and hospitality.”

Giving some concrete examples, she said that Caritas is engaged in welcoming migrants in Rustenburg which is a mining area, and assists many women who come there following their husbands from the neighboring countries. At the same time, it assists many refugee and migrant families with rent while they seek employment and helps migrants from non-English speaking countries to learn English to enable them to integrate better.

Caritas South Africa is also partnering with other religious leaders to curb the Covid-19 pandemic and xenophobic attacks while assisting the victims with shelter, food and other basic needs.

“The share of the journey campaign is not ending here,” she said. “The spirit of the campaign will continue in our Caritas and with hope we are embracing the migrants and refugees as testimony of what Jesus said: “I was a stranger and you welcomed me.”