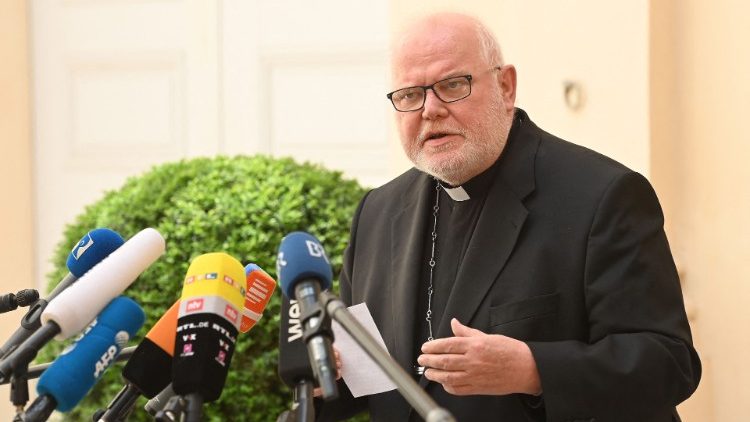 German Cardinal Reinhard Marx asks Pope Francis to accept his resignation as head of the Archdiocese of Munich-Freising, saying he “is willing to personally bear responsibility” not only for his own mistakes in dealing with the clerical abuse scandal, but also for the institutional errors of the Church.

Cardinal Reinhard Marx speaks of “personal failures” and “administrative mistakes”, but also of “an institutional or ‘systematic’ failure” in the handling of the crisis of clerical sexual abuse in Germany, in a letter to Pope Francis in which he submitted his resignation as archbishop of Munich and Freising.

A “personal declaration” from the Cardinal, posted on the Archdiocesan website, says the Pope has authorized the publication of the letter: Pope Francis, the statement reads, “has now informed me that this letter may be published and that I should keep performing my service as a bishop until his decision is made.”

A ‘dead end’ that could become a turning point

In his letter of resignation, Cardinal Marx reflects on the crisis facing the Church in Germany: a crisis, he says, that arose not only from external causes, but “also caused by our personal failure, by our own guilt.” “My impression,” he says, “is that we are at a ‘dead end’ which – and this is my paschal hope – also has the potential of becoming a ‘turning point’.”

Co-responsibility in the crisis of abuse

The cardinal explains that has been considering resignation for the past year. In his personal declaration, he goes into more detail: “In the past months, I have repeatedly thought about my resignation, introspected and tried to make the right decision in prayer and in the spiritual dialogue by ‘discerning the spirits.”

He explains to the Pope that, “in essence, it is important to me to share the responsibility for the catastrophe of the sexual abuse by Church officials over the past decades.”

In the past few months, Cardinal Marx had approached the Westpfahl Spilker Wastl firm – the same firm that had been commissioned for the first investigation of paedophilia cases in the Archdiocese of Cologne – to draw up a report on abuse in the Church of Munich and Freising, pledging to not intervene to influence the final results. Last year, the Cardinal established a foundation in his diocese called “Spes et Salus” to offer “healing and reconciliation” to all victims of sexual violence. He also donated most of his private assets to the foundation.

In his letter to the Pope, published today in several languages today, Cardinal Marx refers to “investigations” and “reports” over the past ten years, which, he stresses, “have consistently shown that there have been many personal failures and administrative mistakes but also institutional or ‘systemic’ failure.” The Cardinal also looks critically at the most recent controversies and discussions which, in his opinion, show that “some members of the Church refuse to believe that there is a shared responsibility in this respect and that the Church as an institution.” Consequently, he said, they “assume a hostile attitude regarding any dialogue for reform and renewal in the context of the sexual abuse crisis.”

A reform of the Church

According to the cardinal, there are two elements that one must not lose sight of: mistakes that can be attributed to persons and institutional failure that challenge the Church to change and reform.” Cardinal Marx, instead, is convinced that a “turning point out of the crisis … is only possible if we take a ‘synodal path’, a path which actually enables a ‘discernment of spirits’.”

The damaged reputation of the Bishops

Looking back over his 42 years as a priest and 25 years as a bishop – 20 of them as ordinary of a large diocese – and in the light of this long experience in the Church, Cardinal Marx says “it is painful… to witness the severe damage to the bishops’ reputation in the ecclesiastical and secular perception, which may even be at its lowest” point. In his view, “to assume responsibility, it is therefore not enough, in my opinion, to react only and exclusively if the files provide proof of the mistakes and failures of individuals.” Instead, he said, “We as bishops have to make clear that we also represent the institution of the Church as a whole.”

The greatest fault of the past: Overlooking the victims

Nor should one, the cardinal says, “simply link these problems largely to past times and former Church officials, thereby ‘burying’ what happened”. Cardinal Marx says he feels “personally guilty and responsible” for keeping silent, for omissions, and for focusing too much on the reputation of the Church. “Only after 2002 and even more since 2010, those affected by sexual abuse have been brought to the fore more consequently and this change of perspective has not yet been completed,” he says, adding that, “Overlooking and disregarding the victims was certainly our greatest fault of the past.”

A signal for a new beginning.

“We have failed,” Cardinal Marx reiterates, frankly acknowledging that “we” includes himself personally. That, he says, is why he is submitting his resignation: as an opportunity to express his willingness to take responsibility, and also as a “personal signal for a new beginning, for a new awakening of the Church, not only in Germany.”

“I would like to show that it is not the office that is in the forefront but the mission of the Gospel. This too is part of pastoral care,” he says in conclusion. Insisting that he continues “to enjoy being a priest and a bishop, he commits himself to pastoral activity, wherever the Pope deems it “reasonable and useful,” and to increasingly dedicate himself to “pastoral care” and to support the work of spiritual renewal of the Church.

Roles in the Church

Cardinal Marx has served as a member of the Council of Cardinals since it was established by Pope Francis in 2013 to assist him in the governance of the universal Church and to study and implement the project for the reform of the Roman Curia. In 2014, Pope Francis also appointed him coordinator of the Council for the Economy. Earlier, in 2012, he was elected chairman of the German Bishops’ Conference, a post he held until February 2020, when he announced that he would not stand for another term during the general assembly in March.

Pope to Italian youth: Be a sign of hope in new and creative ways