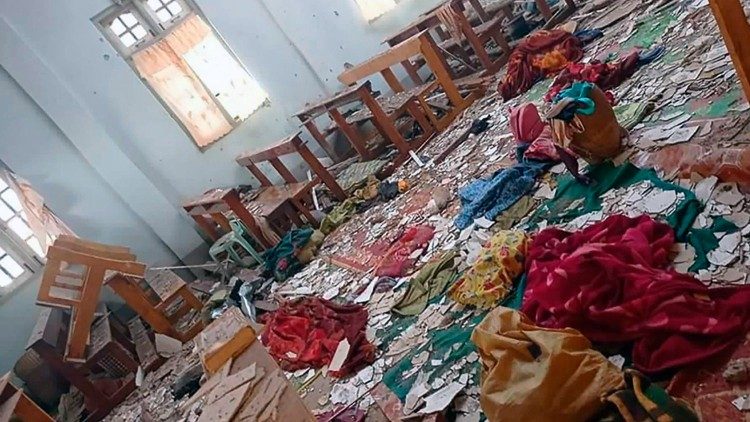 No casualties or injuries were reported in the June 6 attack on the church of Mary Queen of Peace. The structure has been damaged and its windows shattered.

Yet another Catholic church has been shelled by the military in Myanmar.  Ironically, the church is dedicated to Mary Queen of Peace in Daw Ngan Kha in Kayah State. It came under fire on Sunday, but no casualties or injuries were reported as the parishioners sheltering inside sensed the attack and fled to their relatives or into the jungle.  However, the church walls were badly damaged and windows shattered. The attack appears to be deliberate since the church compound is fairly large and clearly visible on a busy street.  Several nearby houses were also damaged by the shelling.

Third church under attack in Kayah

Mary Queen of Peace church is reportedly the third church that has come under military attack in two weeks in Kayah. Sacred Heart Church in Kayanthayar village near Loikaw was hit by artillery shelling that killed four Catholics and wounded at least eight others on May 23 night. St. Joseph Church in Demoso town, one of the key areas of fighting, was hit by military artillery on May 26 night.  However, another reported military attack on Jeroblou Marian shrine in Pekhon near Loikaw in Kayah on June 6 could not be independently confirmed.

According to the Vatican’s Fides news agency, 75 percent of Kayah’s population belong to ethnic minority groups and is the state with the highest percentage of Christians.  There are over 90,000 Catholics, almost a third of the 355,000 inhabitants of the state.  Caritas, the Catholic Church’s social arm, is working with various partners and donors to help some 300,000 people displaced by indiscriminate violence.

The impoverished south east Asian nation has been plunged into chaos since the Feb. 1 military coup that ousted the elected government and detained its leader, Aung San Suu Kyi.  Protests and strikes against the coup have paralyzed parts of the economy.

Christians are a minority in the predominantly Buddhist country, accounting for 6.2 percent of its 54 million population. Myanmar Catholics represent about 1.5 percent of the population.

The crisis has also re-ignited Myanmar’s old conflicts between the military and some of the armed ethnic organizations.  Areas occupied by the Kachin, Chin, Karen and Kayah ethnic groups, who have been facing oppression and persecution at the hands of the military for decades, are largely Christian.  An estimated one-third of Myanmar’s territory – mostly the border regions – is currently controlled by 20-odd armed rebel outfits. The military has stepped up its offensive against ethnic guerrillas and anti-coup resistance groups by deploying fighter jets and heavy artillery.

More than 175,000 people have been displaced in Kachin, Karen, Chin, Kayah and Shan states since the coup, according to the Office of the United Nations High Commissioner for Refugees.  Many of the civilians caught in these conflicts have sought refuge in neighbouring countries, while a large number is displaced within, many of them seeking shelter in Church institutions, Buddhist monasteries and temples.  But even churches, that have been deemed safe for civilians, have not been spared by the military.

Sunday’s attack on Mary Queen of Peace took place despite an appeal by Cardinal Charles Bo of Yangon, the president of the Catholic Bishops’ Conference of Myanmar, who urged all parties in conflict to keep clear of places of worship in keeping with international protocols and conventions.

Myanmar’s military have not only targeted humanitarian organizations.  Some observers say the junta is trying to turn the conflict with the resistance movement into a religious war.

On Saturday, security forces killed at least 20 civilians in the Ayeyarwady region.  Residents of Hlayswe village armed with catapults and crossbows clashed with security forces searching for weapons, resulting in the heaviest death toll in the last past months.

In its latest count as of Monday, the Assistance Association for Political Prisoners, which documents and compiles the casualties of the anti-coup protests, 857 people have been confirmed killed so far by the junta.

The military junta has paid little heed to demands from the Association of Southeast Asian Nations (ASEAN) to respect a “consensus” agreed in late April to end violence and hold political talks with its opponents. Southeast Asian foreign ministers expressed disappointment at the meeting in China on Monday at the “very slow” progress made by Myanmar on its proposal for ending the turmoil.

On Sunday, Pope Francis urged believers of various faiths to set aside a minute at 1:00 pm on Tuesday to pray for peace the Holy Land and Myanmar.  The peace initiative of the International Forum of Catholic Action (IFCA), received the support of  local Catholic Action organizations, the World Union of Catholic Women’s Organizations and other entities.

Pope Francis: let’s pray for peace in the Holy Land and Myanmar