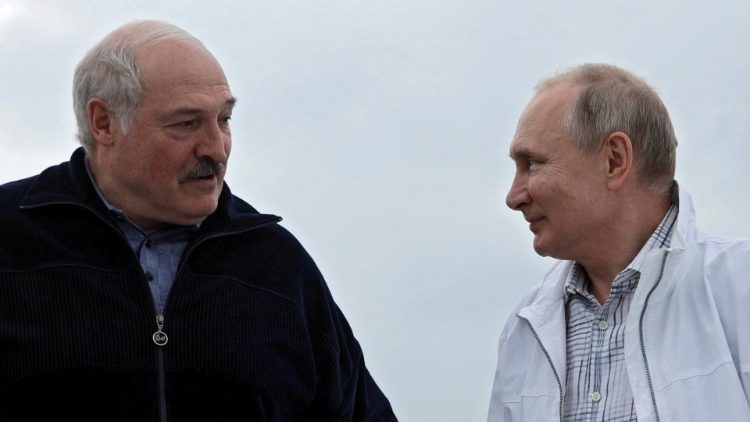 Russia says it will continue with a massive loan of $1.5 billion to neighboring Belarus despite mounting international concern about the treatment of critical journalists and dissidents there. Russian President Vladimir Putin pledged in talks with his Belarusian counterpart Alexander Lukashenko.

They met after the European Union imposed sanctions to punish Minsk for diverting a passenger plane and detain a dissident journalist amid protests against the Belarussian president in several cities.

Russian President Putin was visibly pleased to welcome the man the West regards as Europe’s last dictator.  Speaking in the Russian resort city of Sochi, he even suggested to Belarussian President Lukashenko to swim with him after a yacht tour.

Putin made clear he wants to maintain a friendship with Belarus. He said that Russia would move ahead with a second $500 million loan to Belarus next month despite international concerns.

Russia promised Belarus a $1.5 billion loan last year as part of Moscow’s efforts to stabilize its neighbor. Minsk received the first installment of $500 million in October.

President Putin made clear he disagrees with Western outrage over the detention of a dissident journalist.

Several Western countries have accused Belarus of piracy after Belarusian air traffic control informed the pilot of a Ryanair passenger jet of a hoax bomb threat.

Minsk scrambled a MiG-29 fighter plane to escort the jetliner down and then detained journalist Roman Protasevich, a prominent critic of Lukashenko who was on board.

President Putin whisked away Western criticism about the incident when meeting his Belarusian counterpart. “We had agreed to hold our talks even before the [escalation of multilateral relations after the forced landing of a Ryanair plane],” Putin explained.

He agrees with President Lukashenko that it was an “emotional outburst” from the West. “However, we have things to discuss even without taking these events into account,” Putin said.

Putin reportedly did discuss the detention of Sofia Sapega, the Russian girlfriend of the journalist, who was also taken from the plane.

President Lukashenko complained that the European Union had banned Belarussian aircraft from entering EU airspace, including Belarussian airline Belavia. “Belavia has nothing to do with this Ryanair plane landing in Minsk,” said Lukashenko.

He told President Putin that his “military is blamed for a forced landing and that Belavia is totally destroyed.”

He also stressed that the EU had decided not to fly over Belarussian air space, hurting the country economically. He thanked the Russian president “that Moscow, in turn, refuses to accept planes that do not fly over Belarus.” Lukashenko added: “They felt it that very minute.”

The talks between the two leaders came despite protests. In Berlin, Germany, and other European cities such as Poland and Lithuania, people gathered for demonstrations over the weekend. They wanted to support the opposition in Belarus and demand the release of political prisoners such as journalist Roman Protasevich.

Among the protesters, Nastya Gatlova, a Belarusian living in Berlin: “It’s so difficult because people from Belarus are scared now and they stay at home every day and just wait for help from maybe European, maybe from another country,” she noted.

“But the people from Belarus cannot do anything, but we can do something,” Gatlova added.

But for now, their cries for change are declined by Minsk, where President Alexander Lukashenko maintains what critics view as an iron grip on the former Soviet nation.

The United States and the EU have imposed sanctions on top Belarusian officials amid months of protests. They were triggered by Lukashenko’s reelection to a sixth term in an August 2020 vote that the opposition rejected as rigged.

More than 34,000 people have been detained in Belarus since then, and thousands were beaten by security forces, according to former inmates and rights groups.