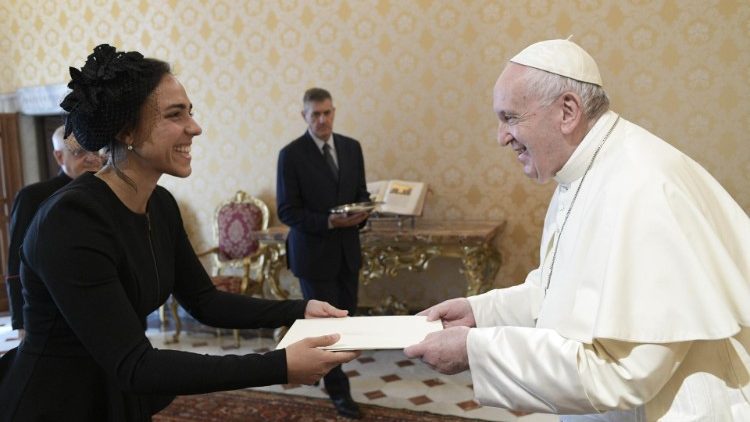 The Australian Ambassador to the Holy See speaks of the fruits of a webinar held jointly with Caritas Internationalis and the Australian Embassy on the improvement of integral ecology in Oceania.

The webinar “How does integral ecology shape our work in the pacific region”, co-hosted by the Australian Embassy to the Holy See and Caritas Internationalis, was “great”, says Australian Ambassador Chiara Porro.

She explains that, as speakers included both members of senior Catholic leadership in the region, as well as those working at grassroot levels delivering projects in the region, “it was great to have different perspectives involved in the discussion.”

Bringing the Pacific to Rome

Ambassador Porro says the event was the fruit of an initial discussion with Caritas Internationalis Secretary General Aloysius John “about how we can highlight the Pacific region, both because it is not so well known, but more importantly because the issues we are dealing with in the Pacific are very central to some of the issues the Vatican is dealing with, such as the question of integral ecology.”

One of the topics discussed was the improvement of networks in the Pacific. “As you can probably imagine,” says Ambassador Porro, “the Pacific is made up of lots of small island states and big island states, such as Australia.” For that reason, she continues, “it is not always easy to work together and collaborate.”

The critical role of the Church

There is a lot of opportunity, she says, “and I think the Catholic Church in particular is critical to this because it holds quite a significant role in a lot of these countries, commands a lot of respect in the population, but also because of its influence in terms of the social and economic values.” The Church also delivers a lot of development projects, she adds.

“For me,” continues Ambassador Porro, it is about solidifying these networks, but “not just within the Catholic community.” It is important also to adopt an ecumenical approach, involving the other Christian religions “to be able to form a stronger voice which can then be used at the global level… with Caritas, but beyond Caritas, too,” she explains.

We can all learn from each other, says Ambassador Porro. “Something that emerged this morning was the experience the Pacific region, unfortunately, has in disaster response.”

Ambassador Porro makes reference to the numerous natural disasters that have struck the region, including cyclones, flooding and bushfires. “One of the things that Caritas has been working on is theology of disaster response and disaster management, and addressing misconceptions about why disasters happen,” she says.

The Ambassador then expresses her desire to develop this further, perhaps collaborating with universities and other interested organisations because “these are issues of interest to many other parts of the world, too.”

Ambassador Porro then mentions that there is a lot of talk about “bringing the Pacific voice to Rome” – for example, holding a forum on the Pacific, somewhat like the Synod that took place on the Amazon region.

Finally, Ambassador Porro notes that the Pacific has a Federation of Catholic Bishops Conferences of Oceania but there is no Secretariat.

“They don’t have a structure, unlike other regional bishops’ conferences,” and this, she says, “limits their ability somewhat to be as influential as others.”

COP26 President: It’s all down to the next ten years