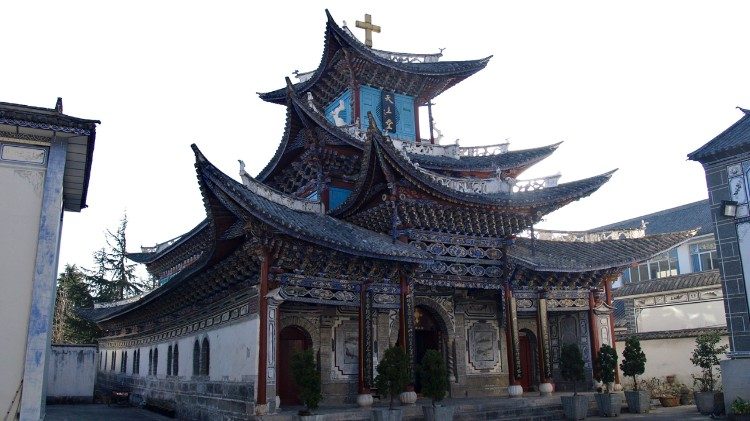 The Vatican Secretary of State is the author of the preface of the book “Un ponte con la Cina – Il Papa e la Delegazione apostolica a Pechino (1919-1939)”by Lebanese Fr. Adel Afif Nasr and published in Italian by Marcianum Press.

Cardinal Pietro Parolin begins quoting the opening words of “Cupimis Imprimis”, Pope Pius XII’s 1952 Apostolic Letter dedicated to the Catholic Church in China: “First of all we wish to express to you Our ardent affection for the entire people of China”.

With these words, the Cardinal notes,  the Pope expresses affection and closeness to the Chinese people at a truly difficult time in their history, a time when many priests, bishops and laypeople who were engaged in evangelisation were either removed from their work or hindered in the exercise of their activities.

A project founded on the Gospel

“Our heart turns to you once again and to you, in particular, we wish to address this letter, to console you, to exhort you paternally, knowing well your anguish, your anxiety and your adversity” Pope Pius XII continues, and Parolin points out that this feeling of closeness belongs to every successor of Peter, all of whom have nurtured a special bond of sincere affection and esteem for the people and the Church in China, always pursuing and maintaining fruitful, fraternal and charitable relations.

Cardinal Parolin says he believes “this is the context and the sentiment, so authentically founded on the Gospel, that has driven the Holy See to seek ever new ways of relating with China.”

He lists several documents and initiatives that witness the Holy See’s concern for China focussing on Pope Benedict XV’s 1919 Apostolic Letter “Maximum illud” and his desire to establish missionary platforms throughout the world and in China. He also analyses Pope Pius XI’s commitment to building a “solid bridge” with China that resulted in establishing an official Apostolic Delegation to Peking to create a link for all the missions in the territory and confirm believers in their faith.

To do so, the Cardinal notes, he entrusted Monsignor Celso Costantini with this Pontifical Representation, a figure who became an authoritative interpreter of the papal project who laid solid foundations for the future of missions in China.

“The future Cardinal was able to juggle many difficulties with the prevailing politics and the ever-present pressure from foreign nations. Despite this, with the help of the Pope and various Vatican departments, he managed to achieve truly strategic goals: first of all, the convocation of China’s first (and so far only) plenary council, with representatives of all missions; religious decolonization and greater inculturation,” Cardinal Parolin writes.

All of this, he says, led to the appointment of the first Chinese bishops, who were strongly desired by the Pope who consecrated them in St Peter’s Basilica in 1926.

The Vatican Secretary of State goes on to pose the question: “What is the secret of this ‘success’?” It lies in a speech delivered by Mgr. Costantini himself on 15 January 1923:

“The Pope loves all nations, like God, whose representative he is; he loves China, your noble and great nation, and, in his heart, he places it after no other; he loves your immense, hard-working, industrious people; he knows your history, which is that of a great people. The Pope’s action among the nations is that of a friend […]. The Pope is the spiritual head of Christians, but his love extends to all men, to whatever religion they belong.”

Cardinal Parolin goes on to say that the Apostolic Delegate promoted these sentiments throughout his time in China. “He even tried, on several occasions, to urge the Holy See to establish direct diplomatic relations with China through a concordat (or through a similar diplomatic instrument), which would allow direct relations with the Government, without foreign intermediaries. Unfortunately, the political and diplomatic situation in the country did not allow the desired result to be achieved, but there is no doubt that the attempt was made. A further effort concerned the so-called question of Chinese rites, a centuries-old controversy that the Congregation for the Evangelization of Peoples finally managed to resolve in 1939.”

The Cardinal concludes by expressing his belief that current circumstances present us with the urgent need for mutual understanding and constructive dialogue and says he hopes the research done by the author (who is also the Postulator for Cardinal Costantini’s Beatification Cause) will be a step forward in this direction.

“Pope Francis often reminds us that a spirit of genuine reconciliation, putting aside the misunderstandings and divisions that are the legacy of the past, is crucial to address the many problems that burden the life of the Church in China.”

Expressing his gratitude for the work carried out by Fr. Adel Afif Nasr and the editor Fr. Christian Gabrieli, OSB, for the “bridge” that they have symbolically allowed us to take a glimpse of between the Holy See and China, Cardinal Parolin says “This is our hope, which becomes certainty because we feel that everything is within a plan that is not ours, but God’s.”