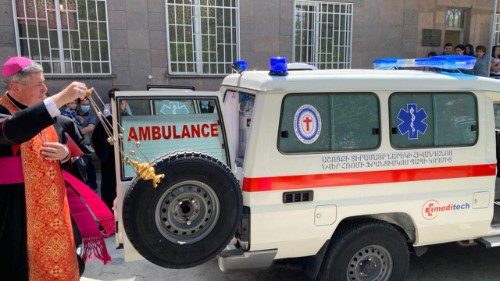 Pope Francis expresses his affection for the people of Armenia with a gift of medical equipment, including a new ambulance.

The Pope’s representative in Armenia, Archbishop Jose Bettencourt, delivered a concrete sign of the Holy Father’s care and concern on Sunday.

The Apostolic Nuncio blessed a gift from Pope Francis for the Catholic “Redemptoris Mater” Hospital in the northern Armenian town of Ashotsk.

According to a statement from the Holy See Press Office, the gift consisted in a new ambulance equipped with the latest mobile medical equipment and emergency respirators to assist patients with Covid-19.

Archbishop Bettencourt, joined by Fr. Mario Cuccarollo—the director of the hospital, held a ceremony at the Ordinariate for Catholics of Armenian Rite in Eastern Europe.

Armenia appears to be emerging from a third wave of coronavirus infections. The country’s population of over 3 million registered just 410 new cases over the past 24 hours.

The “Good Samaritan Foundation”, a humanitarian agency which is part of the Dicastery for the Promoting Integral Human Development, as well as the Apostolic Nunciature in Armenia, took part in the gesture of mercy.

The Pope’s gift came a day after the Armenian Genocide Remembrance Day, which recalls the brutal murder of countless Armenian Christians at the hands of the Ottoman Empire during World War I.

Assisting those in need

The “Redemptoris Mater” hospital in Ashotsk is run by the Fathers of St. Camillus de Lellis, and provides heavily-subsidized healthcare for those in need, offering it free of charge for those who cannot pay.

The Camillians have been caring for people in the Southern Caucasus region for over 25 years.