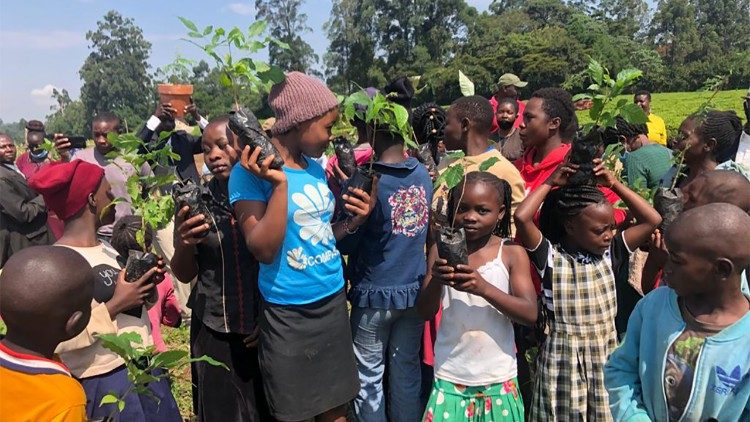 Capuchin friar, Benedict Ayodi, heads The Global Catholic Climate Movement in Africa. He tells Vatican News about his efforts to share and promote reforestation projects and raise awareness of integral ecology in his country and throughout the continent.

Before the pandemic, over 700 million people were living in extreme poverty in the world. According to the alarm issued by the UN, that number risks reaching 900 million by the end of 2021. According to the economist Olivier De Schutter, UN special rapporteur on extreme poverty and human rights, in Africa alone there could be an increase of 25 million. Precisely because “in Africa we have the great problem of extreme poverty, we cannot speak of the cry of the earth without speaking of the cry of the poor.” Pope Francis’ Laudato si’, he says, urges us to care for the poor, and here in Africa that means focussing on the millions of poor people who live in the slums, because in order to take care of the environment we cannot forget the people.

From Nairobi in Kenya, Father Benedict Ayodi, a Capuchin friar and head of The Global Catholic Climate Movement (GCCM) in Africa, reflects on Pope Francis’ 2015 encyclical and speaks to Vatican News about the steps taken within the continent toward ecological conversion.

At the Global Catholic Climate Movement, reforestation projects are a top priority. Like the one in Kenya for the Kakamega Forest which was once part of forest of the Congo Basin but is now the only remaining rainforest in East Africa. It covers more than 200 square kilometres not far from Lake Victoria, in one of Kenya’s most densely populated rural areas. “In this green lung, in a deforested and degraded area, we have planted more than 3 thousand indigenous trees thanks to our Laudato si’ Animators Program and through the local community, parishioners, Caritas, a collaboration with the Anglican Church as well as with other realities that have similar projects: together with our partners we have planted more than 50 thousand trees,” Fr Benedict explains. It’s a project that ties in with both International Forest Day 2021, and with this year’s Earth Day on 22 April, dedicated to the theme “Restore Our Earth”.

Father Ayodi, who is originally from Kakamega itself, knows the rainforest well. “It is like that of the Amazon,” he observes, “so it is very important for this region and for Africa in general to regulate biodiversity and to address the problem of global warming.”

A service to the Church in Uganda and Tanzania

Africa, Fr Ayodi continues, is one of the continents that is most exposed to the effects of climate change and pollution, aggravated by the effects of the pandemic.

A nun planting a tree in Kakamega forest

The GCCM is monitoring the phenomena threatening the very survival of African peoples like the rise in the level of Lake Victoria, famines and locust invasions that have recently struck various parts of East Africa. For this reason, since last fall, it has been promoting a new awareness campaign against climate change. Attention is also focused on “the East African crude oil and gas pipeline”, an oil pipeline that will connect Uganda to Tanzania. “It is a big project promoted by the oil and gas authorities in Uganda and Tanzania and it is already underway. As the World Catholic Climate Movement, we have an advocacy service for the Church in Uganda and Tanzania to help people gain awareness and understand the consequences on the climate of this project, which will significantly increase carbon emissions. In addition, the probability of an oil spill from a pipeline is high, because a large part of the pipeline passes through the watershed of Lake Victoria, an active seismic area. There is also the risk of hazardous waste accumulation, which must be disposed of: the pipeline will need to be cleaned regularly, and hazardous waste containing benzene will be generated from that cleaning.” “For this project, the Capuchin friar explains, land was taken from the people, in Uganda and Tanzania. So first of all it is a question of injustice.” Thus Fr Ayodi goes on to illustrate the realities of underpaid land, of the risk of massive population displacements, and from the environmental point of view, the real danger of destroying many natural reserves in the Great Lakes region with terrible consequences for the animals that live in them.

Fr Ayodi is certain that the path to ecological conversion also passes through local actions. “We have given life, he says, to small groups, Laudato si’ Circles at a parish level in Kenya, Tanzania, Uganda and other countries in Africa: in each one there is a Laudato si’ Animator, and twice a month a meeting is held to talk about Pope Francis’ encyclical.”  There are also initiatives to clean up parks and other areas of the city and to promote responsible consumption within parishes. “We have begun to help priests and religious in general to promote Laudato si’, for example during Sunday homilies,” he says.

The cry of the poor

The Capuchin friar goes on to say that in collaboration “with Caritas or with Jesuit or Capuchin assistance realities, we work with the street children of the Kibera slum or of other Nairobi slums.” He recalls the issue of foreign debt raised in the Pope’s encyclical and speaks of how he and his partners, as well as providing food for the hungry every day, they also encourage women’s empowerment, with projects for small entrepreneurial activities.

The Capuchin friars assist the poor

Fr Ayodi concludes explaining that he has involved his entire community in Nairobi where they have chosen not to use the car in order to curb carbon emissions and have created a Laudato si’ vegetable garden to avoid buying imported veggies. He says other projects include a soup kitchen, the distribution of food cards, and Covid-19 educational and informative projects “broadcast through our television: Capuchin Television, which is the first television in Kenya for Catholics”.

Helping the poor in Nairobi