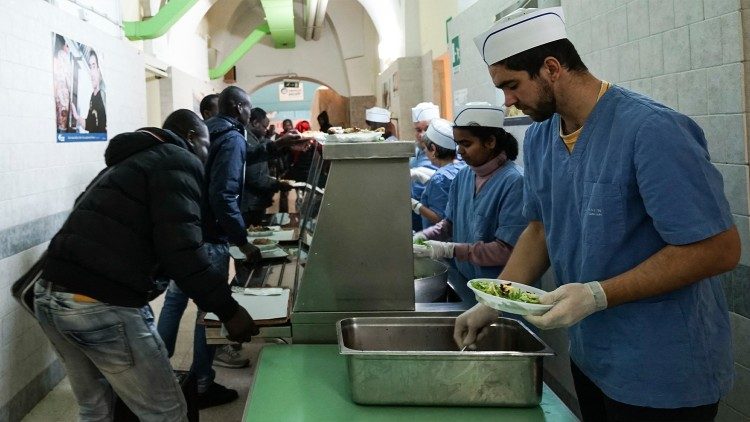 Centro Astalli, the Italian branch of the Jesuit Refugee Service, presented its Annual Report 2021 at a virtual event on Tuesday.

Refugees and migrants are often blamed for problems in host societies but the Jesuit Refugee Service (JRS) shows they capable of forming caring and sharing communities. Filipino Cardinal Luis Antonio Tagle, the prefect of the Congregation for the Evangelization of Peoples, made the comment during a virtual event that the Centro Astalli, the Italian branch of JRS, organized today to present its Annual report 2021.

The Jesuit Refugee Service (JRS) was established in 1980 to accompany, serve, defend and advocate the rights of refugees and displaced people across the globe. In this regard, the Centro Astalli, the JRS counterpart in Italy, assisted over 17,000 refugees and asylum seekers last year through its 8 centres across the country. The report, which provides figures for 2020 – the 40th year of JRS – outlined the main difficulties refugees and asylum seekers encounter in the hope of protection, acceptance and integration in the country.

Besides Cardinal Tagle, others who spoke at the presentation of the Centro Astalli Annual Report 2020 were David Sassoli, President of the European Parliament; a migrant woman from the Democratic Republic of the Congo; and Centro Astalli president, Jesuit Father Camillo Ripamonti.

According to the report, the pandemic highlighted the gaps in the country’s health and welfare systems, where resources have been cut with no fresh investment for years.

On its 40th year, JRS continued to accompany refugees in 56 countries around the world during the pandemic.  The group has served them in urban areas, refugee camps and war zones, and has invested in the education and training of young people and refugee women.

Story of love and compassion

“For me, the document presented today by the Centro Astalli is more of a testimony of humanity, active love and compassion rather than a simple report of activities,” noted Cardinal Tagle in his remarks. “The migrant, especially one who is forced to leave his country, can thus recount his own story. We could almost hear the cries of families separating while fleeing the dangers, and we could even experience their fears of crossing seas and lands to an unknown future,” said the cardinal, who is also president of Caritas Internationalis, the federation of Catholic charities worldwide. Caritas also reaches out to people in movement across the globe.

Arriving in a new country, Cardinal Tagle noted, brings in new burdens, uncertainties, rejection and manipulation. “The pandemic has exacerbated their situation, but thanks to the welcome, respect and accompaniment provided by the Centro Astalli, their dark journey has been bathed in light.”

“Migrants,” the 63-year-old cardinal pointed out, “are human bridges, and the experience of the Centro Astalli has also shown that immigrants arriving in Italy have also been able to create social bridges.” “Migrants are often accused of causing problems in society but the testimony of the Centro Astalli offers instead a different picture, they are capable of forming communities that care and share,” he said.

The United Nations High Commissioner for Refugees (UNHR) estimates some 80 million people have been forced to flee violence, dictatorship and harsh social and economic hardships at home. About half of them are under the age of 18.

Rebuffed by discrimination and bureaucracy

Many refugees and migrants who arrived in precarious situations have fallen even deeper into poverty. After long exhausting journeys, the report noted, they frequently reach a dead-end with regulations and procedures that are often discriminatory and bureaucratic. Thus, many give up on asserting their rights. Basic needs, such as meals, showers, food packages and medicines, are in high demand across Italy. Of the 3,500 fed at Rome’s Centro Astalli sites, more than 30 percent are homeless. The other eight centres around the country have similar stories.

“Particularly critical is the situation of large families and single-parent families,” the Centro Astalli report said. They stay in the centres for a long time (at least 12 months), but even after moving out, their misery continues, with the informal safety networks, friends and relatives unable to provide adequate support. In 2020, the Centro Astalli supported 178 single mothers (5 percent of the total). There were over 11,000 migrants rescued or intercepted in the Mediterranean and brought back to Libya. They have been detained there under conditions that the United Nations defines as unacceptable.