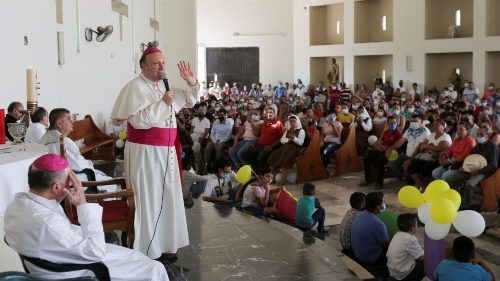 Archbishop Franco Coppola, the Apostolic Nuncio to Mexico, shows the Church’s unwavering support to victims of drug-related violence, with a visit to a small town where drones were recently used to attack police officers.

The Papal Nuncio has visited a small Mexican town which has become a drug cartel battleground epicenter.

The Apostolic Nuncio, Archbishop Franco Coppola, celebrated Mass in the town of Aguililla, in the western state of Michocan, to support its beleaguered people.

They’ve been cut off from the rest of the country by feuding drug cartels, who’ve dug trenches in roads and barricaded themselves with stolen vehicles.

A cameraman films a bullet-ridden chapel in El Aguaje

The Jalisco New Generation Cartel is feuding with the Michocan family allied with a group of united cartels, over the use of the area as a drug smuggling route and a source of extortion from nearby iron ore mines.

This week, two drones fitted with plastic explosives fell on two police officers. They were wounded but survived, and were treated in hospital.

Church walks with the people

Archbishop Coppola says that officials from the previous administration of President Enrique Pena Nieto had pleaded with him to stay silent, because mention of violence from organized crime could damage the lucrative tourism industry, which is a major earner for Mexico.

But he has stressed that: “The duty of the Church is to be on the peoples’ side. So, I want to be here.”

Bishop Cristobal Asencio Garcia, whose Diocese of Apatzingán includes this town, is praying for a change of heart by the cartels and conversion away from violence from their gunmen, known as sicarios.

An abandoned house in El Aguaje

During last year alone, 35,000 people were killed by the cartels nationwide.

The people of Aguililla greeted the Pope’s representative in Mexico with gratitude, holding white balloons in their hands and hope in their hearts.

Prayer vigils for victims of the latest shipwreck off Libya

Pope: Migrants at sea should never be denied aid