Iraq: An overview of the Church and of the country’s Christian communities 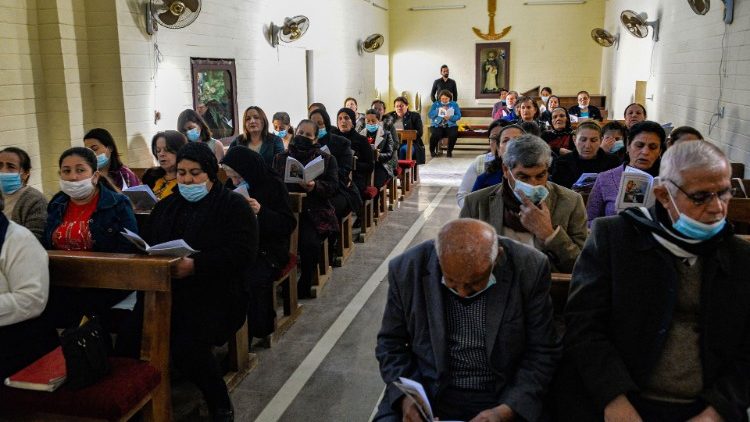 Pope Francis is to undertake the first-ever apostolic journey to Iraq from 5 to 8 March. We offer an overview of the nation’s ancient and diverse Christian communities, of their plight and of their challenges.

Christianity has been in Iraq from its earliest times, as the Acts of the Apostles testify. Its origins go back to the preaching of St Thomas the Apostle and his disciples Addai and Mari in the first century A.D., which extended to East Asia. Iraq is therefore, biblically and historically, an important land for all Christians who have played an important role in its history.

A history of persecution and discrimination

The Iraqi Christian community, that is composed today of Chaldeans, Assyrians, Armenians, Latins, Melkites, Orthodox and Protestants, has been marked by persecution and discrimination since the arrival of Islam and even after Iraq’s independence. Under Saddam Hussein’s secular regime, Christians had found a modus vivendi that allowed the Church to carry out its activities, also in the charitable field. However, already at that time – especially after the succession of wars started in the Eighties – more and more Iraqi Christians began to emigrate establishing a number of communities abroad.

The most massive exodus occurred after the US-led military intervention in 2003, due to insecurity, violence and attacks and between 2014 and 2017, after the establishment of the self-proclaimed “Islamic State” (IS – DAESH) in the north of the Country.

On the eve of the second Gulf War, Christians in Iraq were estimated between 1 and 1.4 million (approximately 6% of the population). Since then, their numbers have plunged to barely 300-400.000, according to the most recent estimates of the pontifical foundation Aid to the Church in Need (ACN).

Between 2003 and March 2015, approximately 1,200 Christians were killed, including Archbishop Paulos Rahho of Mosul of the Chaldeans, who was murdered in 2008, 5 priests and the 48 victims of the jihadi attack against the Syrian Catholic Church of Our Lady of Help in Baghdad on October 31 2010) and 62 churches were damaged or destroyed.

The IS occupation of the Nineveh Plain, which is the cradle of Mesopotamian Christianity, literally emptied this region of Christians. More than 100,000 were forced to flee their homes along with other persecuted minorities such as the Yazidis. Many of these families have found refuge in Iraqi Kurdistan, namely in Ankawa, the Christian quarter of Erbil, in refugee camps in Jordan, Syria, Turkey and Lebanon, or have sought asylum in Europe and other countries. In recent years, at least 55,000 Iraqi Christians have also expatriated from Iraqi Kurdistan. Many churches and Christian properties have also been destroyed or severely damaged. An important part of the Christian historical heritage was saved from destruction by Archbishop Najib Mikhael Moussa of Mosul of the Chaldeans, who managed to save over 800 historical manuscripts and for this, in 2020, was awarded the Sakharov Prize by the EU.

Insecurity and sectarianism an ongoing threat to Iraqi Christians

After the military defeat of the Caliphate in Iraq in 2017, Christians have gradually begun to return to the Nineveh Plain, with the help of the universal Church and, in particular, of the pontifical foundation Aid to the Church in Need (ACN). Today, almost 45% of Nineveh’s Christians have returned to their homes, while 80% of the churches in the Plain are undergoing reconstruction (with the exception of Mosul, due to red tape problems).

To date, about 57% of the damaged homes belonging to Christian families in the region and included in the reconstruction plan have been repaired, 35% of with the financial support of ACN, who has also facilitated the establishment of the Nineveh Reconstruction Committee (NRC) with  the aim of encouraging Christians to return to their communities and ensuring them and to other minorities protection.

Yet the lack of security and ongoing harassment, intimidation and exactions by local militias and hostile groups continue to threat the Iraqi Christian community, especially in this area. This was confirmed by the Report “Life after Isis: New challenges to Christianity in Iraq”, released in autumn 2020 by ACN,  and by “Open Doors”, a Christian organization which helps persecuted Christians around the world and has promoted the “Centres of Hope” initiative in Iraq.

The aspiration to full citizenship in a peaceful and pluralistic Iraq

Insecurity, political instability, sectarianism, but also corruption and the economic crisis, which has worsened with the COVID-19 pandemic, continue to discourage Christians from returning or staying in the Country. To ensure their future in a united and jihadi-free Iraq, they need above all  recognition of their full citizenship. This is the reason why Christian Churches have long insisted for a secular Constitution and for a more active role in the Iraqi political and social life. The Constitutional Charter approved in 2005 formally guarantees respect for religious freedom, but Article 2 actually establishes Islam as the official State religion and a primary source of legislation. Islam continues to be a privileged religion in the Iraqi system to the detriment of minorities.

Chaldean Patriarch H.B. Louis Raphaël Sako has repeatedly brought up this issue, insisting on the importance of an open dialogue between all parties involved to build a strong and pluralist State that respects all citizens, regardless of their religion and ethnicity. This was also reiterated at the last Synod of the Chaldean Church in August 2019, which called for a State based on “equality, justice, law” which recognizes a fair representation for Christians in government institutions.

The Iraqi Churches have found support on these issues from the Prime Minister Mustafa al-Kadhimi. Since taking office on 7 May 2020, al-Kadhimi has expressed on several occasions the desire to stop the exodus of Christians and to involve them in rebuilding the Country, emphasizing that they represent an important component of Iraqi society. These words have been accompanied by action. One important gesture was the recent go-ahead from the Iraqi Parliament to the recognition of Christmas as a public holiday throughout the country on a permanent base.  More recently, even the Shiite leader Muqtada al Sadr, head of the powerful Sadrist Party, has shown his willingness to dialogue with the Iraqi Christian community, by returning the properties stolen over past years by Shite groups to their legitimate owners.

The Holy See’s concerns  for Christians in Iraq

The plight of Christians in Iraq has always been of great concern for the Holy See, especially since the second Gulf War of 2003, which Pope Saint John Paul II strenuously opposed, as he did in 1991, warning about “the tremendous consequences that an international military operation would have for the population of Iraq and for the balance of the Middle East region, and for the extremisms that could stem from it” (Angelus, March 16 2003).  The Pontiff was fully aware of the repercussions that this second armed conflict would have had on Christian communities in Iraq and throughout the region.

The establishment of the Islamic State in Iraq and Syria in 2014 further precipitated their situation. In this context, Pope Francis too has constantly voiced his closeness “to the beloved Iraqi people”. This concern was reaffirmed by Cardinal Pietro Parolin, on the occasion of his trip to the Country in December 2018. During his visit, Vatican Secretary of State insisted on the importance of overcoming hatred and expressed the Church’s gratitude for the Iraqi Christian witness which – he said – has become “a living example for all Christians in the world”.

Pope Francis The reiterated the hope that Iraq “can face the future through the peaceful and shared pursuit of the common good on the part of all elements of society, including the religious” on 10 June 2019, during the Reunion of Aid Agencies for the Oriental Churches (ROACO), when he expressed his desire to visit Iraq in 2020.

The importance of preserving the historical presence of Christians in the Country and the need to guarantee their security and a place in the future of Iraq was once again highlighted on the occasion of the second official visit to the Vatican by President Barham Salih, on January 25, 2020, which focused on the challenges facing the Country and on the importance of promoting stability and the reconstruction process.

Pope Francis insisted on the need to protect the “Christian presence” in Iraq and in the entire region during an online meeting on the Syrian and Iraqi humanitarian crisis organised by the Vatican Dicastery for the Service of Integral Human Development with dozens of Catholic NGOs, on 10 December 2020. “We must work to ensure that the Christian presence in these lands continues to be what it has always been: a sign of peace, progress, development, and reconciliation between peoples”, the Pontiff said in a video-message, calling on the international community to encourage the return of communities dispersed by war.

”In this context, the announcement on 7 December 2020 of Pope Francis’ pastoral journey has been welcomed with enthusiasm by the Iraqi Church. The papal trip takes place 21 years after Pope John Pauls II’s “dreamed visit” to the Country, on the occasion of his Jubilee pilgrimage in the footsteps of Abraham, Moses, Jesus and Paul in year 2000, was cancelled due to the political situation in Iraq.

Pope to Franciscan Centre for Solidarity: continue your work, following in Jesus’ steps

Pope prays for victims of floods in Indonesia and East Timor