Our Fathers: What is it like to be the child of a priest? 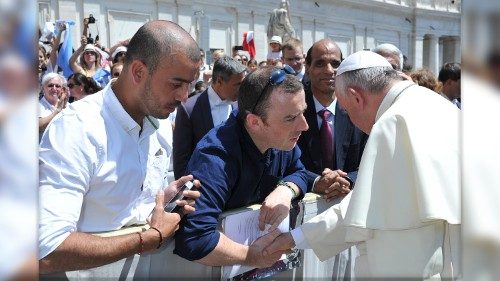 Coping International founder Vincent Doyle, himself the child of a priest, accompanies others in the same situation through a web site and now through a published book: ‘all for the Body of Christ’, he says.

During the Angelus on Sunday, 14 February, Pope Francis commented on the Gospel passage in which Jesus cures a leper. In that discourse, the Pope brought attention to the fact that many people today suffer not only from leprosy, but also from other “illnesses and conditions that carry social stigmas with them.” *

Some of today’s outcasts

Children of priests suffer from one of the “conditions” within the Catholic Church. No one can better describe what this burden is like than one of these children.

“A darker world exists, veiled by history, lies and deception. I lived in this world though I was born into it, thus knowing no difference. This is a world that is buoyed by conditions, and if the child of a priest does not obey these scrupulous conditions, they are ostracised, to begin with. Harm and emotional abuse permeate the duration of their lives; harm is normalised for these people.

“Hidden and buried, these children are called profane names by uncaring people and are sadly viewed as a means to an end of desired secrecy, deception and historical denial. They are threatened, assaulted and manipulated.”

These words were penned by Vincent Doyle, the son of Father John J Doyle. Vincent, however, knew the priest as JJ and grew up believing he was his godfather. It was sixteen years after Father died in 1995 that all the clues that had haunted Vincent throughout his childhood fell into the place. Vincent had long “suspected there was more to our closeness than met the eye”. Father Doyle’s death had provoked “the grief of a child for his father” which at the time young Vincent “had neither the words nor maturity to voice.” Everything fit together on what would have been his father’s 72nd birthday in 2011 as 28-year-old Vincent read one of his father’s poems.

“Reading the poem slowly, I felt something internally crack, a recognition, an awareness, and I knew … ‘he was my father, wasn’t he?’ I voice my newfound knowledge. A tear escaped my mother’s eye, and the sense of relief that overcame me was like a prisoner’s first breath of fresh, free air. Truth!”

Vincent Doyle in “The Demesne” park near his home, in Castlerea, Roscommon

Along with that piece, so many others fell into place for Vincent. With that revelation, Vincent’s life took on a different direction. He forged relationships with members of the Irish hierarchy, and with the Apostolic Nuncio to Ireland at that time, Archbishop Charles Brown. These relationships, along with a degree in psychotherapy, led him to publish the web site Coping International, Children of Catholic Priests, an officially registered charity in Ireland. Archbishop Diarmuid Martin, the master of ceremonies at Father Doyle’s ordination, provided financial backing for the site on one condition: that it be “done right”.

Vincent launched Coping International in 2014 without any promotion. His idea was to see how many people would find the site on their own, thus indicating the breadth of the reality. After 31 months, stats indicate that 13,500 people from 175 countries found the site after googling such phrases as:
● Children of priests
● My dad is a priest
● I am pregnant and the dad is a Catholic priest
● Secret children of priests

The most recent data Vincent published states that regular traffic to the site comes from the “Democratic Republic of the Congo, Kenya, Uganda, South Sudan to name but a few. Equally, it is developed countries where we see the most significant volume of traffic.”

But as we know, this sad reality cannot be quantified by data or statistics. Real people, real children hide behind these indicators. Their gut-wrenching testimonials can be found on Coping International. The web site unfolds in a step-by-step process. After finding helpful information, a self-help section provides direction to children of priests seeking assistance. In addition, priests who want to find out what their options are can also find information and assistance.

Given the absence of any public guidelines related to this issue, Vincent pursued other connections, including the Holy See’s Permanent Observer to the United Nations at the time, Archbishop Ivan Jurkovič and officials of the Congregation for the Clergy. Through Vincent’s dialogue with these parties, guidelines initially drafted in 2009 “under the guidance of Pope Benedict XVI”, explained by Cardinal Beniamino Stella as a “working instrument to be referred to when presented with a situation of this kind”, * were eventually released to the public in January 2020. These are now easily accessed on the Coping International site.

When the existence of these internal guidelines was made known in February 2019, Cardinal Beniamino Stella, Prefect of the Congregation for the Clergy frankly responded to questions in an interview with Vatican News. The Cardinal cited “the safeguarding of the good of the child, that is, the right of the child to have at his side a father as well as a mother” as a “primary objective” in granting dispensations from the clerical state to priests with children. He further elaborated on this point saying these “rights” include the accompaniment of “the growth of the child”, “the affection of the parents”, “an adequate education”, everything “that pertains to an effective and responsible exercise of paternity, especially in the early years of life.”*

Our Fathers: a Phenomenon of Children of Catholic Priests and Religious, published in December 2020

At the end of 2020, Vincent published Our Fathers: a Phenomenon of Children of Catholic Priests and Religious. The book recounts his own story and that of Coping International. The last chapter provides helpful tips and advice for anyone wishing to navigate canonical issues related to children of priests, or wishing to right the injustices children of priests often face. For some children the injustice may be not receiving an education, or not having enough food to eat because the mother is not financially independent. Another child of a priest may be left to “their own devices in cities across Africa, whose fathers throw them out of the celebration of the Eucharist, leaving them crying and baying for bread.”

Speaking about the book, Vincent says “he is pleased” with it.

“It is just a seed. The Church must nurture the seed or else it will die. It may not be the answer, but it is an answer.” *

Recognition in the Vatican

Shortly after the book’s publication, Vincent received a letter addressed by him by Father Bernard Ardura, President of the Pontifical Committee for Historical Sciences. Father Ardura says about Our Fathers:

“To my knowledge, this is the first time that a book has been specifically and exclusively devoted to this subject.” *

He then responded to some of the specific issues Vincent raises in the book, such as:

● the term “lamentable defection” used by Pope Paul VI when referring to priests who have fathered children;
● the culture of silence imposed on mothers and the children priests have fathered;
● the culture of secrecy forced on these children and mothers, sometimes through threats and unjust confidentiality agreements;
● the complexities involving the “contradiction” presented when expectations freely chosen by priests and religious do not permit them to parent a child and the discernment necessary to resolve the situation for the benefit of all those concerned.

Father Ardura stated in the letter already cited, that it is a matter of justice that the Church finally address this issue:

“When, for the first time in its two-thousand-year history, the Church examines this issue, she is fulfilling her mission which is not only a mission of charity, but also a mission of justice. Let us not forget, Jesus tells us in the Beatitudes: ‘Blessed are those who hunger and thirst for righteousness, for the Kingdom of Heaven is theirs!’ (cf Mt 5:6)” *

“Every sin, including sexual sins, are sins against justice. Adultery is an act of multiple injustices: against the child who may be conceived, against the injured spouse, and against God. The injustice against the child is based on the fact that the boy or girl would thus, generally speaking, be deprived of the normal (or optimal) conditions needed to mature, namely, a father and mother united in their parenting. This injustice is compounded if the father has taken a vow of celibacy and has caused a breach of sacred trust. In addition, there is the injustice in some cases of the child being deprived of knowledge of his or her father’s identity. The father of the child may be still ministering as a priest and be known to the child, enjoying the child’s trust. When the true identity of the father eventually becomes known, the resultant experience of deception, confusion re [sic] one’s identity, and breach of sacred trust can be traumatic.”

In the end, Vincent rightly inserts the reality of the treatment of children fathered by priests within the Church’s strong pro-life stance. The fact that children of priests are not granted the rights every other child can take for granted is an indication that members of the Church do not apply the Church’s pro-life teaching consistently. This is a gross inconsistency to be remedied so that what the Church teaches are the rights of every child be applied to every child regardless of parentage. These rights include, as he cites in his latest book: “respect of life from the womb until tomb, promotion of natural rights of children and the child’s right to be known by his or her biological parents and furthermore, to know their biological parents.”

In his endorsement for the book, Bishop Kevin Doran, Bishop of Elphin, Ireland and Chairperson of the Council for Life of the Irish Bishops Conference is in complete agreement with Vincent:

“Since the dawn of human history, there has been a tendency to stigmatise children whose parents, for one reason or another fail to measure up to the expectations of society, or certain elements society. No child should be treated less favourably on the grounds of race, religion, nationality, sex or disability, or because of the social status, employment status or marital status of his or her parents. This, quite clearly, includes the children of priests or religious who, like all children are loved by God from the first moment of conception.”

In short, Vincent promotes a “family first theology” that applies to all people in the Church’s pews, regardless whether their Father is the one preaching at the pulpit or not.

* All citations except those accompanied by an “ * ” are taken from the book Our Fathers: a Phenomenon of Children of Catholic Priests and Religious.