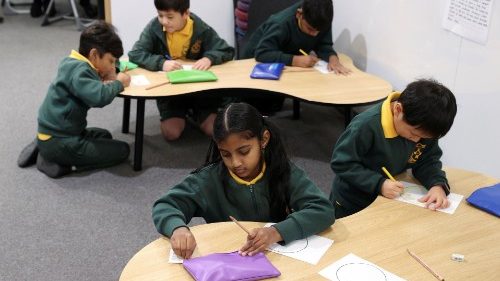 The Catholic Church in Australia celebrates 200 years of its contribution to education in the country. The Bishops, in a pastoral letter, highlight the distinctive contribution of clergy, religious and laypeople to this significant milestone in the life of the Church.

The Bishops in Australia have written a pastoral letter to school leaders, staff, students and families for the 200th anniversary of Catholic education in the country, celebrated throughout 2021 with a range of events, beginning with the national virtual launch on Thursday.

The bi-centenary anniversary celebrates the founding, in October 1820, of the first official Catholic School in Australia by Irish priest Father John Therry. The school, according to Catholic historians, taught 31 students. An Irish Catholic convict, George Marley, who was sent to the colony, opened the school for Fr. Therry and ran it for three years. In 1837, the school was transferred to the site of the present St. Patrick’s Cathedral in Parramatta, and it was subsequently entrusted to the care of the Marist Brothers in 1875.

The letter issued on Wednesday recognizes “the contribution of religious, clergy and laypeople to the foundation of Catholic education and the distinctive role Catholic schools play in education and forming young people of faith and service in their communities,” the Bishops said.

Catholic education at the service of Australians

“From very humble beginnings with the opening of the first official Catholic school educating just 31 students located on Hunter Street in Parramatta, Catholic schools have grown to educate more than one in five Australian students, with many others attending Catholic pre-schools, colleges and universities,” said Archbishop Anthony Fisher, chairman of the Australian Bishops’ Commission for Catholic Education.

“We are fortunate to have Catholic schools in most towns and suburbs, and university campuses in most capital cities, serving students from diverse backgrounds and beliefs.”

Archbishop Fisher noted that while the students are no longer all from poorer families, as so many were in the first century-and-a-half of Catholic education, Catholic schools continue to welcome Aboriginal and Torres Strait Islanders, refugees, those with disabilities and students who are financially disadvantaged.

“Alongside families and parishes, Catholic schools are the Church’s principal meeting point with young people, and are integral to the Church’s mission of transmitting the faith to the next generation and forming young people as future contributors to Australian society.”

Notwithstanding the many highlights of Catholic education in the past two centuries in Australia, the Bishops acknowledge the harm caused by child sexual abuse in Catholic schools and other institutions over the years.

Archbishop Fisher notes that “this damaged many children and families, as well as the credibility of Church institutions, including schools, in the eyes of many.” However, “as these failings have been steadily corrected at a systemic level, the trust of families is being gradually rebuilt.”

Welcoming the pastoral letter, she pointed out the unique situation of education in Australia marked with the support of successive governments to the funding of Catholic and non-government schools. “This support,” Collins noted, “has enabled our schools to be accessible to families that seek a faith-based education for their children and ensures diversity in school choice.”

Collins went on to highlight that it also relies on the commitment of Church leadership to actively support and foster the mission of Catholic schools and the work of other Church agencies, including Catholic hospitals, charities and social services who, in their own way, contribute to Australian society.

Our Fathers: What is it like to be the child of a priest?

Croatia ‘severely tried by earthquakes but strong in faith’ – Nuncio