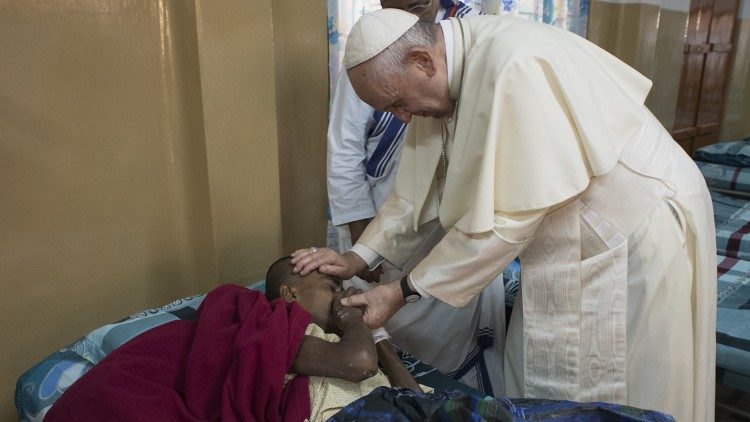 In his message for the 29th World Day of the Sick on 11 February, Pope Francis urges a path of healing grounded in a trusting and interpersonal relationship between the sick and those who care for them.

“A society is all the more human to the degree that it cares effectively for its most frail and suffering members, in a spirit of fraternal love.” Pope Francis makes the point in his message for this year’s World Day of the Sick.

In order to fight hypocrisy and self-idolatry, he says, Jesus asks us to “stop and listen, to establish a direct and personal relationship with others, to feel empathy and compassion, and to let their suffering become our own as we seek to serve them,” the Pope says in the message, released by the Vatican on Tuesday.

The Catholic Church marks the annual day on 11 February, the feast of Our Lady of Lourdes. Instituted by Pope Saint John Paul II on 13 May 1992, the first World Day of the Sick was marked the following year. The theme of this year’s observance is, “You have but one teacher and you are all brothers” (Mt 23:8), which calls for “a trust-based relationship to guide care for the sick”.

Pope Francis says that the annual day “is an opportunity to devote special attention to the sick and to those who provide them with assistance and care both in healthcare institutions and within families and communities.”  He expresses his spiritual closeness and the Church’s loving concern for those suffering the coronavirus pandemic, especially the poor and the marginalized.

Drawing attention to the theme of this year’s observance, the Pope warns Christians about the danger of “self-idolatry” when our “faith is reduced to empty words and we are unconcerned with the lives and needs of others.”

Noting that Jesus criticizes those who “preach but do not practise”, the Pope says “none of us is immune to the grave evil of hypocrisy, which prevents us from flourishing as children of the one Father, called to live universal fraternity.”

Sickness, the Pope notes, makes us realize our own vulnerability and our innate need of others. It raises the question of life’s meaning, which we bring before God in faith, in order to seek a new and deeper direction in our lives.

In this regard, the Pope holds out the biblical figure of Job as a model. Abandoned by his wife and friends in his misfortune, he says, Job feels forlorn and misunderstood. Yet, he rejects hypocrisy and chooses the path of honesty towards God and others.

The Lord hears Job’s cries and confirms that his suffering is not a punishment or a state of separation from God, much less a sign of God’s indifference.

Closeness between the “sick” and carers

The Pope says that sickness has many faces. They are the sick, as well as all those who are ignored, excluded and are a prey to social injustices that deny their fundamental rights.

The current pandemic has exacerbated inequalities in our healthcare systems and exposed inefficiencies in the care of the sick, with the elderly, weak and vulnerable people not always granted access to care, or in an equitable manner. The pandemic has also highlighted the dedication and generosity of healthcare personnel, volunteers, support staff, priests, men and women religious.

The Holy Father pays them homage, saying they are “a silent multitude of men and women” who “chose not to look the other way but to share the suffering of patients, whom they saw as neighbours and members of our one human family.”

“Such closeness,” the Pope remarks, “is a precious balm that provides support and consolation to the sick in their suffering.”  As Christians, he says, we experience that closeness as a sign of the love of Jesus Christ, the Good Samaritan, who draws near with compassion to every man and woman wounded by sin.

He says that as a community, we too are called to be merciful like the Father and to love in particular our frail, infirm and suffering brothers and sisters, leaving no one behind, especially those most in need.

Pope Francis then speaks about the importance of fraternal solidarity towards our neighbours, which takes a variety of forms. “Serving means caring for the vulnerable of our families, our society, our people.”  We are called to set aside our own wishes and desires, the pursuit of power, and look to the faces of the most vulnerable, touching their flesh, sensing their closeness and helping them.

For a therapy to be effective, the Pope points out, “it must be relational, as it enables a holistic approach to the patient.”

This path of healing grounded in a trusting interpersonal relationship, he emphasizes, can help doctors, nurses, professionals and volunteers in caring for the sick. This relationship between the sick and carers, based on mutual trust and respect, openness and availability, he says, will help to overcome defensive attitudes, respect the dignity of the sick, safeguard the professionalism of healthcare workers and foster a good relationship with the families of patients.

Jesus, the Pope concludes, proves this by healing “not by magic but as the result of an encounter, an interpersonal relationship.”