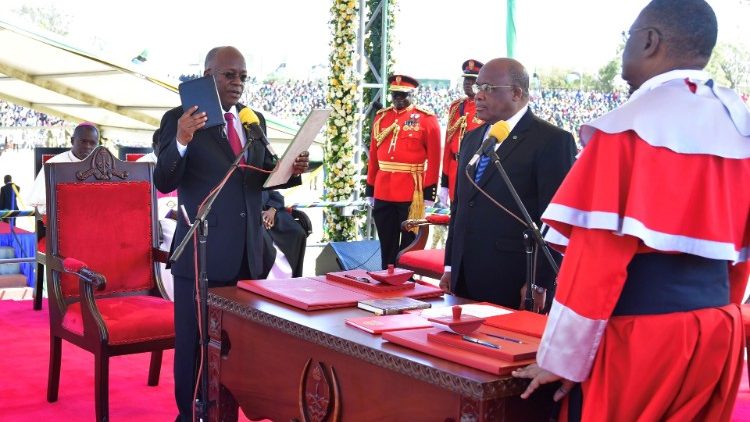 Gratitude, but also fear. These are the reactions of missionaries when they talk about the newly re-elected Tanzanian President, John Magufuli, who was sworn into office for a second term recently.

“In the first mandate,” missionaries who spoke on condition of anonymity, told Agenzia Fides, “the President (Magufuli) stood out for his commitment to building infrastructure. With the help of China, a historical ally of Tanzania, roads and railways have been built, internal and international connections have improved. There is no comparison with the past,” said the missionaries in their assessment.

Improved education and a robust fight against corruption

“On this point”, the missionaries continue, “we can only praise the commitment of the government. It reorganised the teaching staff by choosing the most qualified teachers and offering training to the least trained. (The government) also insisted on the fact that all children must have at least a basic education. The measures affected the entire national territory. It has been a very important step forward,” they complimented.

Another element judged positively is in the fight against corruption.

“President Magufuli,” they add, “has been relentless towards the corrupt and corruption. He has launched stringent policies that have drastically reduced the phenomenon throughout the country and at all levels,” they said.

This is something that has had a positive effect on investments (in the country). It has favoured an expansion of the economy. The economy has continued to grow in 2020, despite the coronavirus pandemic. The state budget for the 2020 – 2021 financial year envisages growth of 5.5%, although the World Bank estimates growth will likely only be around 2.5%.

Deterioration of human rights and authoritarianism

However, there are also downsides.

“What scares us,” the missionaries say, “is this President’s style of action: A tough, decisive style, which at times is dictatorial.” According to Freedom House, an organisation that monitors respect for human rights and democratic values in the world, “the authorities (in Tanzania) have intensified their efforts to contain Opposition parties in recent years. In 2016, the government banned all political demonstrations and rallies, drastically limiting Opposition parties’ ability to mobilise public support. In January 2019, Chama Cha Mapinduzi (CCM), (the ruling party in power for 50 years) used its parliamentary majority to approve amendments to the law on political parties that further restricted the rights of Opposition groups,” said the missionaries.

The government has arrested several high-profile Opposition figures in 2019 and 2020, thus continuing a campaign of repression.

“Anyone who criticises the president,” the missionaries observe, “runs the risk of being stopped by the police and ending up in prison. Opposition politicians, journalists, (some) members of Non-Governmental Organisations were arrested during the election period. Democratic principles are in question. The President himself is trying to break the two-term limitation in order to run for a third time,” suggest the missionaries spoken to.

Discussion of COVID-19 not tolerated

“In the country,” the missionaries conclude, “there is no mention of the Covid-19 emergency or the threats posed by Jihadists in the southern districts of the country. The President assures that these dangers are being addressed, but there is no public debate on them. Tanzanians are forced to trust the President, and many do, relying entirely on President Magufuli and his policies.”