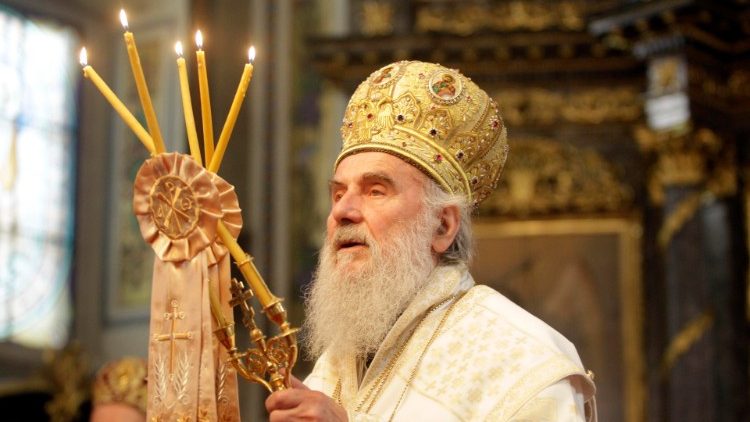 The Pontifical Council for Promoting Christian Unity mourns the death of Patriarch Irinej, head of the Serbian Orthodox Church.

Just three weeks after presiding at the funeral of the Orthodox Metropolitan of Montenegro, Serbian Orthodox Patriarch Irinej succumbed to the coronavirus in a hospital in Belgrade, at the age of 90.

Irinej, born Miroslav Gavrilović, was elected Patriarch of Serbia in 2010. Christians are a large majority in Serbia, with most belonging to the Serbian Orthodox Church, of which Irinej was the head. The church has ecclesiastical jurisdictions in Serbia, Bosnia and Herzegovina, Montenegro, and Croatia, with other congregations located in the Serb diaspora.

An example of faith and dialogue

Upon news of the Patriarch’s death, the Pontifical Council for Christian Unity issued a statement saying, “Throughout his ministry, His Holiness remained an example of faith and dialogue, humble and joyful, totally dedicating his life to God and fostering the spirit of communion within the Serbian Orthodox Church.”

The statement added that the President of the Pontifical Council, Cardinal Kurt Koch, sent a letter of condolence to the Archbishop of Sarajevo – the Locum tenens of the Patriarchal Throne – “in which he recalled with gratitude his meetings with the Patriarch , as well as the warm and fraternal hospitality of His Holiness.”

Miroslav Gavrilović, the future Patriarch Irinej, was born on 28 August 1930 in the village of Vidova, near near Čačak, in the Kingdom of Yugoslavia (now Serbia). At a young age he entered the seminary of Prizren and graduated from the Faculty of Theology in Belgrade.

After completing his military service, he was appointed as a teacher in the Prizren seminary. Before taking up his position as a professor in 1959, he received tonsure as a monk in Rakovica monastery, taking the name Irinej. On Good Friday of that same year, he was ordained a hieromonk in the church of Ružica in Kalemegdan. He was then sent to Athens for postgraduate studies.

Appointed in 1969 to head the school of the monastery of Ostrog, he then returned to Prizren as rector of “his” seminary. In 1974 he became vicar of the Serbian Patriarch with the title of Bishop of Moravica; and in 1975 Bishop of Niš, a position he held for 35 years.

Following the death of Patriarch Pavle in November 2009, Irinej was elected the 45th Patriarch of Serbia on 22 January 2010, and at the same time Archbishop of Peć (seat of the patriarchal monastery) and Metropolitan of Belgrade and Karlovci. On 28 August 2020, on the occasion of his 80th birthday, Patriarch Irinej, received messages and congratulations from many Orthodox religious leaders, including the Patriarch of Moscow, Kirill; the Patriarch of Constantinople, Bartholomew; and the Patriarch of Romania, Daniel; as well as from Pope Francis, as reported by the site of the Patriarchate of Serbia.

Upon his death on 20 November, church bells rang out in mourning throughout Serbia, and many of the faithful came to churches to light candles and offer their prayers for the repose of Patriarch Irinej. The date of the Patriarch’s funeral has not yet been announced.

Pope at Angelus: ‘We enter God’s Kingdom through the door of humble service’