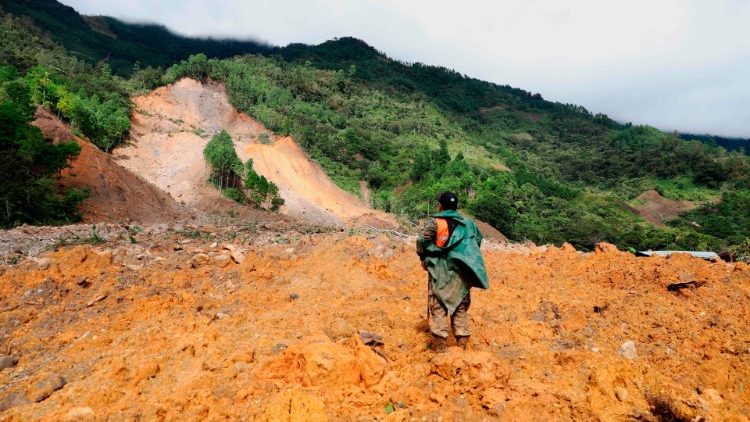 Pope Francis prays for all those affected by Tropic Storm Eta as she continues to sweep across Central America.

Pointing to a flag being held by a pilgrim present in St Peter’s Square for the Sunday Angelus, Pope Francis said “I see a flag there that makes me think of the people of Central America, affected in recent days by a violent hurricane”.

Tropical Storm Eta has swept into Central America, causing, he said “many victims and considerable damage”, aggravating “the already difficult situation of the pandemic”.

After the recitation of the Marian prayer, the Pope prayed that the Lord “welcome the dead, comfort their families and support those who are most affected, as well as all those who are working hard to help them.”

Eta churned toward Cuba and the southern tip of Florida, after leaving dozens dead and over 100 missing in Central America which it hit earlier in the week as a major hurricane.

Cuba has been bracing for Eta even as searchers in Guatemala were still digging for people believed buried by a massive, rain-fueled landslide. Authorities say 25 people are confirmed dead and at least 100 are missing in Guatemala, many of them in the landslide in San Cristobal Verapaz.

The Hurricane Center said Eta was located about 140 miles west-southwest of Camaguey, Cuba, Saturday and was moving northeast. The storm was expected to hit Cuba by early Sunday, and approach the Florida Keys and south Florida late Sunday or Monday.