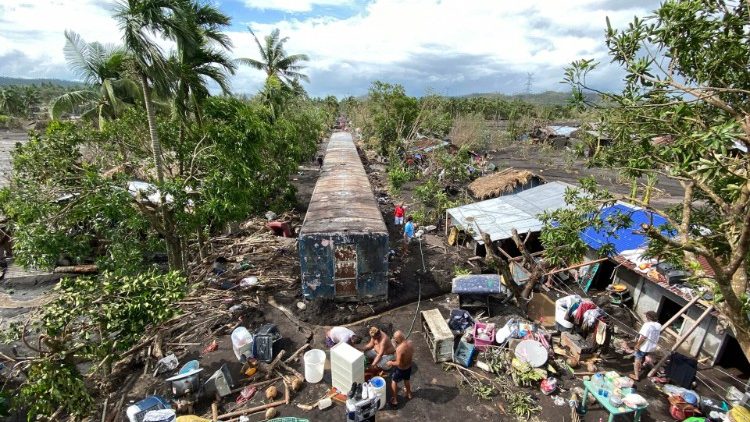 Two eastern provinces of the Philippines have been hardest hit by the most powerful cyclone this year. Brother Joseph Salando in Albay province explained to Vatican News the destruction around inthe wake of Typhoon Goni.

In the Philippines, the death toll from the world’s most powerful cyclone this year has climbed to 20 so far.  As super Typhoon Goni lashed the country over the weekend, some 13,000 shanties and houses were damaged or swept away in the eastern region that was first hit by the ferocious storm.

Albay and Catanduanes provinces, south of the capital Manila, took the brunt of gusts of up to 310 kph and accounted for all deaths.  More that 400,000Civil defence officials estimate about 370,000 people have been displaced.  The 18th storm to hit the Philippines this year, evoked memories of Typhoon Haiyan, which left more than 7,300 people dead or missing, and displaced more than 5 million in the central Philippines in November 2013.

Brother Salando spoke about destruction everywhere. Many survivors found shelter in public schools, others in parishes, many of whose churches were damaged.  One had most of its roof blown away and inside it was a mess.  A parish was sheltering some 30 families who requested to be accommodated for two more days. Listen to Brother Joseph Salando

He also spoke about the resilience of the people to be back on their feet.  He said they are coping with the situation by saving what they can. He saw two families preparing dinner with pork from a pig that drowned.

Complex calamity of typhoon and pandemic

The string of typhoons that hit the Philippines this year, comes at a time when the Covid-19 pandemic is straining the nation’s financial and logistical resources, making the typhoon relief work very difficult.  With 2,298 new confirmed cases of Covid-19 infection on Monday, the total has surged past number to 385,400, with more than 7,200 deaths.  With the displaced sheltered in schools and parishes, there is fear of a surge in infections.

With the Covid-19 pandemic and typhoon, they are going through a “complex calamity”, Brother Salando said.  People who have taken shelter in evacuation centres, public schools and churches, find it difficult to maintain social distancing.

UN: free press is essential for justice and peace in the world