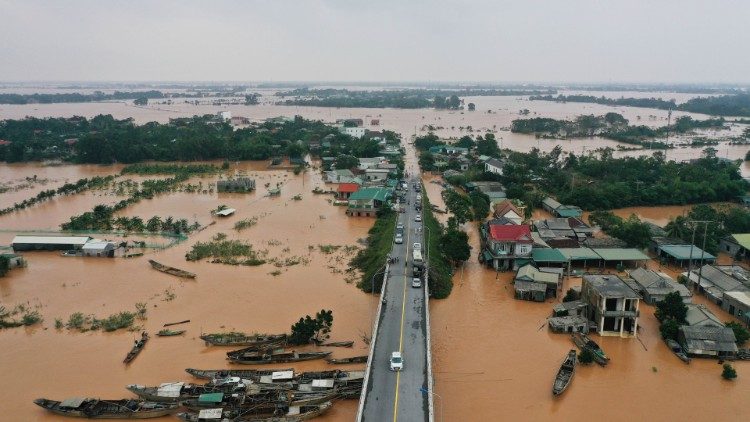 In a little over a month, Vietnam’s central region has been battered by 7 tropical storms and typhoons, causing widespread floods and landslides that killed more than 200 people.

Volunteers and workers of Caritas Vietnam are visiting and assisting people in the central provinces who have to face the brunt of 13 storms this year with some severe flooding.

In just over a month, Vietnam’s central region has seen 7 tropical storms and typhoons, causing floods and landslides that killed 235 people and caused an estimated $740,000 in damage in several provinces. The rain from the storms has caused the worst flooding in the region in more than 30 years.

The latest of these typhoons, Vamco, made landfall in Vietnam on Sunday with winds of up to 150 kph, after leaving 67 dead in the Philippines. The storm has damaged more than 400,000 homes, the International Federation of Red Cross and Red Crescent Societies said. At least 150,000 people are at risk of going hungry.

According to Caritas, the social arm of the Catholic Church, rebuilding homes and recovering their livelihood are extremely important apart from immediate help and survival. Farming, such as growing vegetables, rice, raising livestock and poultry, which is the mainstay in the central provinces, has been devastated.  Many families have lost everything in the floods and landslides.

The new director of Caritas Vietnam, Father Joseph Ngo Si Dinh, led a delegation to the central provinces, Nov. 9-11, to survey the flooded areas. They first visited the Diocese of Huế and its two adjoining provinces, talking to families and providing them material and spiritual support.

Father John Nguyen Huy Tuan, director of Caritas Ha Tĩnh, said priests were actively involved in bringing food and relief to the affected people and moving them to safer places.

Temporary shelters have been built to accommodate 25 families. A parish mobilised its young people to rescue families trapped in flooded homes.

Caritas Vietnam, in collaboration with dioceses and parishes, has been engaged in social outreach and charity works to help people after natural disasters.

The social arm of the Catholic Church assists people to rebuild their lives, repair damaged houses and build new homes for families who have lost theirs. It also provides people and families with seeds, livestock, water filtering systems, and finance for school children.

Caritas discussed ways to come up with concrete plans or projects to rebuild the lives of people regardless of their religion. Father Dinh has urged Catholics to help every person in need. “We hope that the people most affected by these storms, be they Catholic or not, will get some relief,” the Caritas director said.