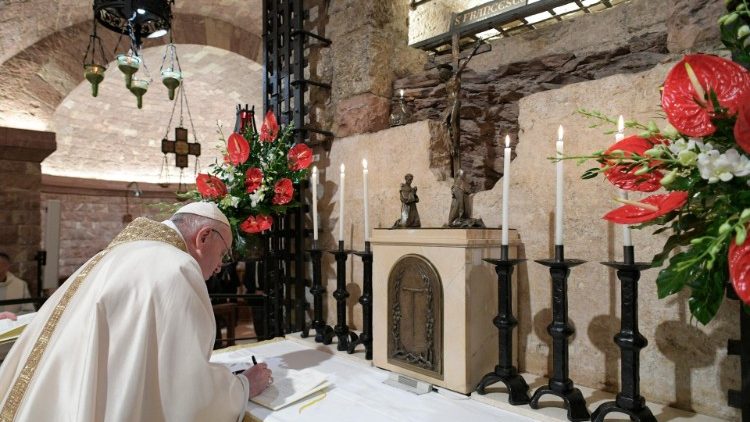 The European Bishops’ Conference (COMECE) highlights the importance of Pope Francis’s Encyclical Letter “Fratelli tutti” as a guide pointing Europe on the path of integral development.

The European Bishops have welcomed Pope Francis’s third Encyclical letter on fraternity and social friendship as a new compass useful also at the political level to guide the European Union in policymaking.

Fratelli tutti, the Bishops said in an article accompanying their statement on Tuesday, “indicates the path towards integral human development, spelling out the needed steps to transform our economic and political systems and to shape them with attitudes such as openness, dialogue, engagement, solidarity, fairness, care for our common home, justice, promotion of the common good, support for the poor and marginalized.”

A call to common fraternity

Explaining further, Fr. Barrios Prieto, General Secretary of COMECE, describes the new Encyclical as “a call for a new way of living human relations” – not only on paper or by words – but “with our daily actions, in private, public or professional life, overcoming social cultural and religious divides.”

In the wake of the 2019 Document on Human Fraternity signed in Abu Dhabi, it “invites us all to be fraternal with each other, to help one’s neighbor whoever he or she is, without any sort of discrimination,” he said.

The new Encyclical letter, continued Fr. Prieto, contains a strong reference to the “dream of a united Europe” as envisioned by its founding fathers. It will also “inspire COMECE’s work in the years to come.”

The EU Bishops highlighted salient themes in Fratelli tutti in their Tuesday statement, including social-economic affairs, human rights, education, ethics, ecology and migration, among others.

They reiterated Pope Francis’s appeal against a “throwaway culture”, appealing that politics should be at the service of the common good, putting “human dignity back at the center.”

The Bishops also pointed out that in the light of the many conflicts in the world, lasting peace will only be possible on the basis of a “global ethic of solidarity and cooperation.” They re-echoed the Pope’s call for a reform of international organisations and economic institutions which integrates the needs of local communities and fosters “a renewed encounter with the most impoverished and vulnerable sectors of society.”

As regards fundamental rights, the COMECE statement reaffirms the Bishops’ support for the inalienable, universal nature of human rights and encourages the promotion of protection from discrimination for all regardless of religion or minority denomination.

Fratelli tutti, the Bishops said, calls for a “culture of encounter” and action towards “inclusive and constructive dialogue among all cultural components of society.” It also advocates for “an ethics of international relations” to tackle inequalities between individuals and countries, and distinguishes between politics that searches for power and politics that connects love with hope.

The Bishops also called for implementing the principles of integral ecology based on Laudato si’ which links the social with the ecological dimension and calls for “ecological conversion.”

In addition, they reiterated Pope Francis’ call for protecting the rights of persons to remain in their home country in safety and dignity, or, when not possible, to migrate to a country where they can live and prosper.

Pope at audience: psalms lead to adore God and love His children