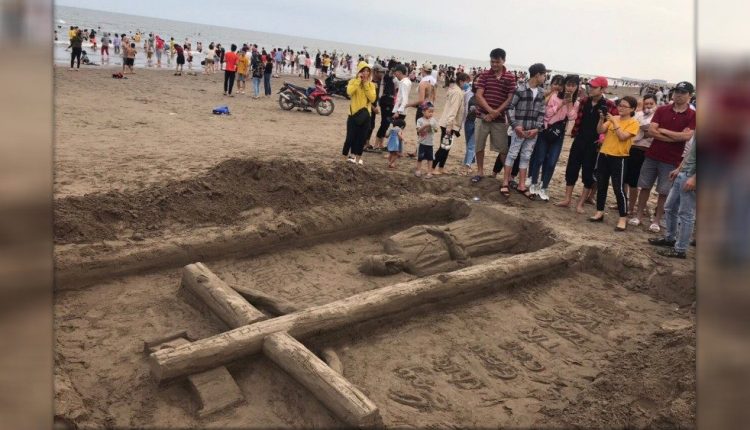 Three young Vietnamese have found a novel way of expressing their gratitude to Pope Francis for the hope and inspiration he has been providing as humanity continues its battle against the Covid-19 pandemic.

Three young people from Nam Dinh, in north Vietnam, made an impressive sand sculpture on the beach of the Nghia Hung district, depicting the Pope’s special “Urbi et Orbi” blessing and prayer held at the Vatican on March 27, as the world battled the Covid-19 pandemic.

The Holy Father presided over the evening prayer service in a deserted and silent St. Peter’s Square under a steady rain. Standing tall in front of the basilica was a 16th-century cross that was specially brought for the occasion from Rome’s Saint Marcello’s Church.

The cross that had miraculously remained unscathed in a church fire, had been taken in a procession from Saint Marcello to St. Peter’s in 1522 during the great plague of Rome.

The young Vietnamese recreated the March 27 scene in a 4×5-meter artwork in sand, with the Pope looking up to the crucified Christ on the cross in silent prayer.

Lai Trinh, a professional wood sculptor and his two Catholic friends, Nguyen Son and Tran Nhat created the sand sculpture in three hours.  They used simple tools such as a shovel, string, knife, trowel, and a large brush.

Speaking to a journalist, Lai Trinh said that all three who are passionate about sculpture, have created this piece entitled, “The Pope prays”.  They wanted to express their religious faith and invite everyone to join in the fight against the Covid-19 pandemic, inspired by the scene of Pope Francis.

“We are inspired by the image of the Pope praying for the world to escape from the Covid-19 pandemic,” Lai Trinh said.  Sculpting, he explained, is their daily work, but making a work entirely of sand is a novelty.

Nguyen Son said with great devotion they participated in the “Orbi et Urbi” blessing and prayer that was streamed live online, even though it was midnight in Vietnam.

It is not the first time that Lai Trinh has created a sand sculpture. He had earlier made a 5-meter tall sculpture of the Pope in a beach in Nam Dinh.

“Pope Francis prays” was created on May 1.  It was a welcome surprise for thousands of people who flocked to the beach because of two consecutive holidays.

April 30 is a public holiday in Vietnam, marking the reunification of North Vietnam and South Vietnam.  May 1 is observed as Labour Day worldwide.

The Pope held his Urbi et Orbi prayer and blessing at a time when Italy, the worst hit in Europe by the pandemic, had already surpassed the total number of cases and deaths in China where the virus began.

At the March 27 prayer, Pope Francis offered a meditation on the crisis facing the world,  exposed the Blessed Sacrament for adoration and imparted his Urbi et Orbi blessing, offering everyone the opportunity to receive a plenary indulgence.